MEASUREMENTS: USB Isolation with Nobsound ADuM4160 device and hi-res DAC. The world these days, and the audiophile microcosm. 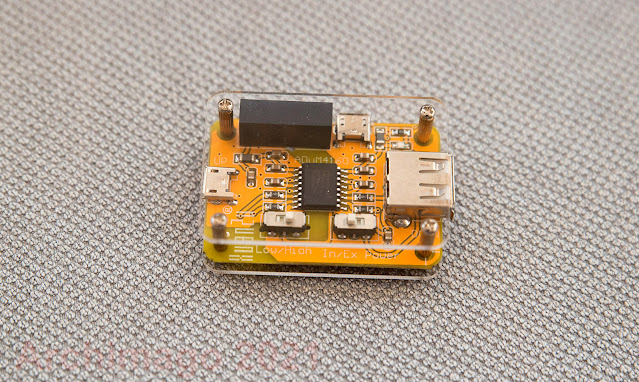 After writing about very high resolution measurements with the E1DA Cosmos ADC last week and touching on basically "state of the art" fidelity like the Topping D90SE, for this week's post, I thought it would be good to talk about something more "fundamental". Often spoken of among audiophile tweakers but rarely have I seen evidence of actual value/effect for many of these devices.

Before I begin with this post or even show you anything, let me just say that I do not believe audiophiles need USB isolation for use with devices like DACs unless you know you have noise issues. I think we've all see indiscriminate suggestions that audiophiles need all kinds of noise filters and isolators (like this, or this). Sometimes these things cost quite a significant chunk of change compared to the downstream device (like DAC) itself!

Over the years, I have tried out a number of USB DACs with computers and simple streamer devices like the Raspberry Pi. With a normal set-up, I cannot say I have ever heard an issue with any of the various decent DACs I've tried. Likewise, measurements already suggest that in general there are no major noise issues with at least reasonable modern devices.

However, there are times when the system is complex enough where indeed you do see ground loops and noise like the 8kHz USB PHY noise pop through. A couple months back, I showed you some of this when we took the rather useless AudioQuest JitterBug FMJ for a spin in some of these situations! Today, let's look at the effect of that little inexpensive Nobsound ADuM4160 USB Isolator (typically can be purchased for <US$25) you see in the picture above.

This device uses the Analog Devices ADuM4160 "Full/Low Speed USB Digital Isolator", see that linked datasheet for full details. Notice that although this is USB2.0 compatible, speed is limited to 1.5Mbps or 12Mbps which means that if we connect a DAC to this, we are limited to 24/96 stereo playback (USB Audio Class 1 fallback for most modern DACs). Remember this limitation and only proceed if you can accept this for whatever purpose you might have. 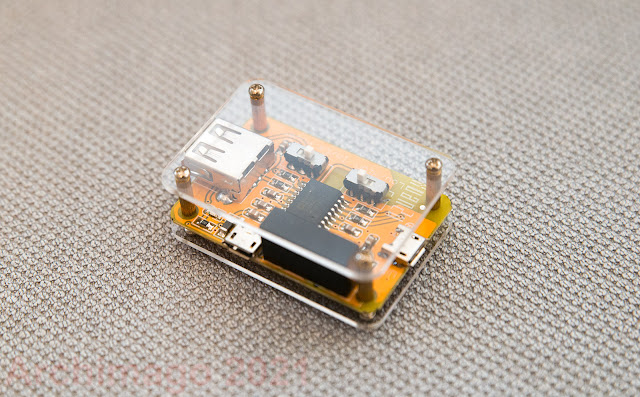 As you can see from the images, this device allows you to connect the isolator with a microUSB cable on the right to your computer (USB-A to microUSB). And then on the left side, there's a female USB-A connector where you can plug devices that you want isolated from the computer/source into. There are a couple of small switches to change between Lo-speed (1.5Mbps) and 12Mbps Full-speed, plus one to select whether +5V should come from an external power supply (the side microUSB connector). I'm not sure what the power limit is without an external source, but I have been able to successfully run the Topping D10 Balanced as shown below which seems to need ~200mA.
That clear plastic hood protects from stray fingers while keeping the cost down.
You might be wondering: "So Arch, why do you have such a thing if you don't believe USB DACs need isolation?"
The answer is simple. It's because when I run measurements using a multipurpose computer, I typically have multiple USB devices attached to the computer, so in order to prevent noise from the computer, or ground loops affecting the ADC, or DAC, a device like this should do the job. Let's put that hypothesis quickly to the test with this post.
Let's start by showing the set-up:
As you can see, we have my Intel NUC 6i5SYH computer on the left. Here's how it's all connected up: 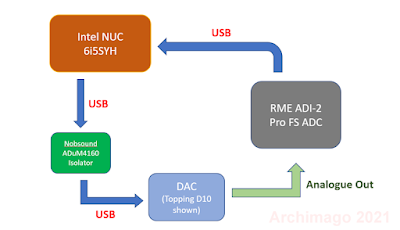 Obviously, we can take the Nobsound isolator in and out of that chain to see if it makes a difference. In the picture above, we have the Topping D10 Balanced (silver) with balanced cables. Let's see how a simple 1kHz 0dBFS tone measures using this DAC (at 24/96). Let's use ASIO4ALL to play the test tone to the DAC, and capture the data from the RME ADI-2 Pro FS, all through the same computer as shown. Note that I did not need to use a separate USB power supply; the D10 Balanced (and D10s) is able to run with just the current provided through the isolator, more power-hungry devices will need an external power source plugged in through the side microUSB connector: 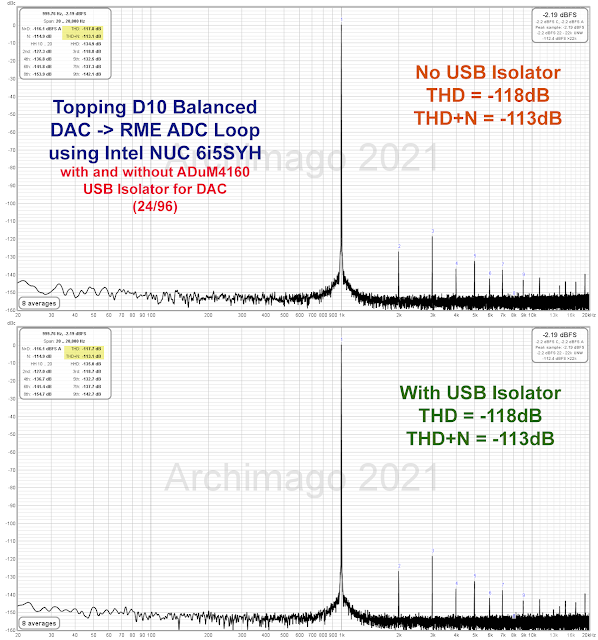 As you can see, with balanced cabling (in this case I used TRS --> XLR), the isolator made no difference. Balanced devices with their inherently superior noise rejection is designed to function very well even in "noisy" set-ups.
I trust the result above is no surprise! So, let's try the single-ended setup. This time, we'll use the Topping D10s DAC instead: 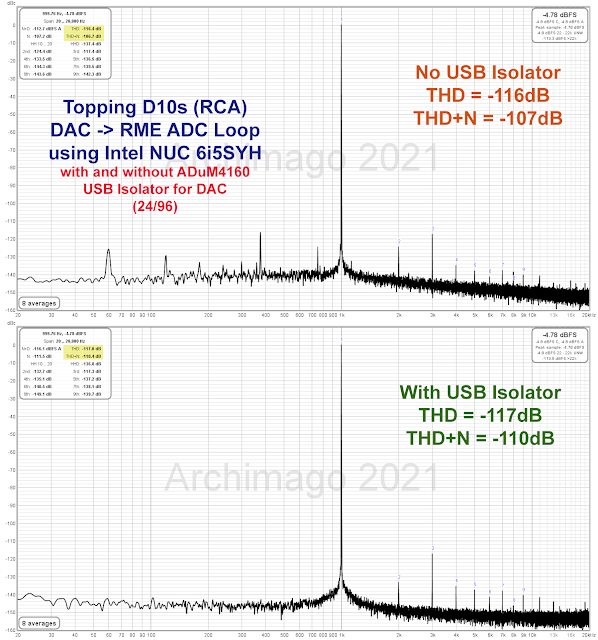