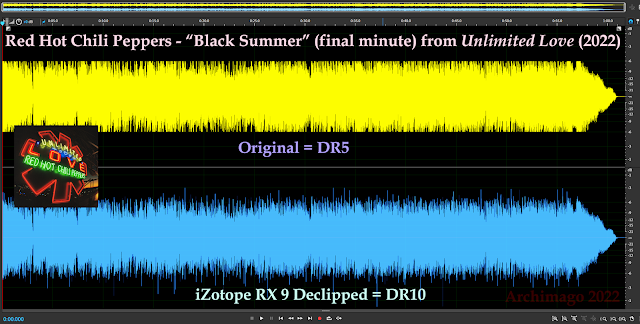 Let's get right to the heart of the issue with the diagram above!

There have been discussions among audio sites like Audiophile Style and Darko Audio that this latest album from RHCP - Unlimited Love (2022, average DR7) - is their most "audiophile-friendly".

Flea, the band's bassist, tweeted on April 1st (hope not meant to be April Fools' joke!):

“For you audiophiles out there, the new RHCP record is mastered directly from the tape we recorded it on, no computers, no lame compression or limiters”

In the image above, I extracted the last minute from track 1 ("Black Summer"), a portion of the music which is quite loud for a peek at the waveform. One look at the original data clearly shows that the music has gone through a compression step at some point in order to create that "flat top" DR5 in the image above. Flea is wrong.

Whether this happened in the recording, mixing, or mastering steps, who knows. The clear use of dynamic compression is present in both the 24/96 version and on the CD. Clearly, music like this does not benefit from the "hi-res" 24/96 version so I would recommend saving your money if you're tempted to purchase a download. As usual, be critical when buying hi-res.

You'll notice that below the DR5 tracing, what I have done is used iZotope RX 9's "De-clip" function to restore some of the compressed portions and expand the peaks. Here's the batch process which simply consists of applying -6dB to the signal (I used the 24/96 version of the song), and then one of iZotope RX 9's De-clip default settings to restore "Extreme Analog Clipping". I previously discussed doing this a few years back. 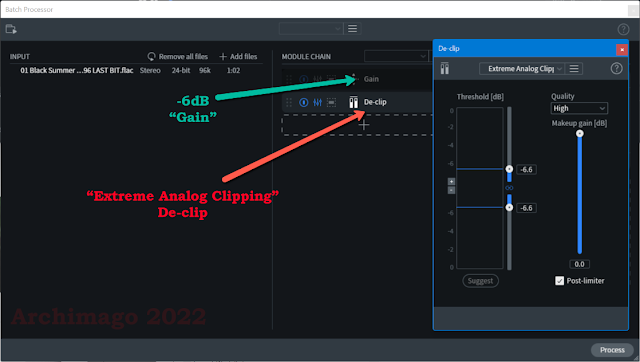 As you can see, the de-clipped version doubles the DR value to DR10 for that 1-minute segment.

We can overlay the original and de-clipped versions to see where the software detected compression and expanded those regions: 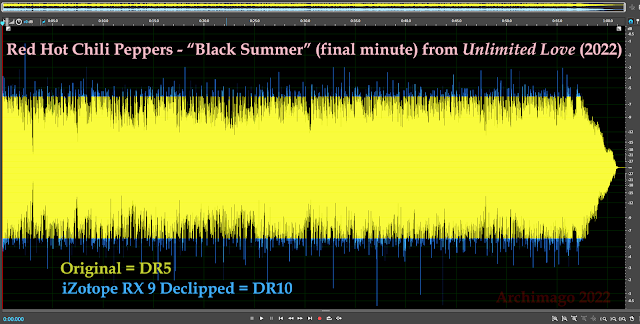 Pretty cool, eh?
I normalized the 2 tracks to the equivalent amplitude using Adobe Audition's ITU-R BS.1770-3 loudness meter at -12.25dB LUFS. Download and have a listen here:
RHCP - Black Summer Demo (Original vs. iZotope De-clipped)
As usual, I present these demo tracks as a short segment for testing and education only based on the principle of "Fair Use". Please delete the tracks when you're done testing and purchase the album if you like the music.
Do you hear much of a difference with the de-clipped track?
Personally, I find the difference to be present but subtle. Over the years, I have processed a number of albums this way but the "reconstituted" effect is not anywhere near as good as a proper studio mastering job. For example, the recent Tears For Fears demo using a higher dynamic range multichannel downmixed to stereo was much superior. Once the music has been squashed, as the saying goes - "the damage is done". There is loss of resolution, nuances have been compromised, even if nominally we can apply some de-clipping to create a higher DR version. As I discussed before, I suspect this could be what happens with vinyl as those flat tops go through adjustments (eg. summing low frequencies), RIAA EQ, vinyl cutting, and eventual playback from the physical medium to reconstitute something that measures with a higher DR but in essence probably was still the original compressed signal to begin with.
BTW, other software can also do this de-clip processing. For example, check out Perfect DeClipper. I ran this track through that software as well and similarly got a DR10 output using the default settings.
Well, at least Unlimited Love is an improvement over Californication (1999, DR4), Stadium Arcadium (2006, DR5), or another of the typical Vlado Meller hot mess mastering jobs like I'm With You (2011, DR4). Would have been nice if Flea were correct that this album had "no lame compressors or limiters" applied. (It's OK to have some compression... Just leave us a few more dBs, double digit DR would be nice!)
Alas, we have to dig back over the years to 1991's Blood Sugar Sex Magik (DR14) before you see an album from RHCP with a double-digit average. Incidentally, if we look at USA album sales figures, Blood Sugar Sex Magik was their biggest selling album at around 7.7M, followed by Californication at 5.9M. Since 2000 with digital downloads, streaming, and overall worsening dynamic compression, we don't see album sales like that anymore except with some of the biggest contemporary pop like say Ed Sheeran with >9M for x (Multiply) (2014) or Taylor Swift's 1989 (2014) with >10M.

I see that GoldenSound made an interesting video on some of the complexities of measurements here: 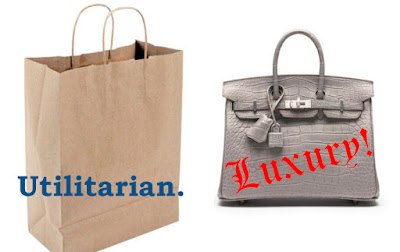 To end, I thought I'd address a recent article from Michael Lavorgna on Twittering Machines; entitled "Those Obscure Objects of Desire".
It's fair to say that since the days of the now-defunct AudioStream, my opinions on audio and the value of many audio "objects" appear quite different than what Lavorgna champions (some discussions here and here with Herb Reichert as the main author). Heck, I doubt we'd even enjoy the same albums or visual art pieces. (I trust despite the exchange of words over the years, this isn't mean-spirited and we can't chat over dinner and enjoy a beer talking about life and audio if the occasion ever arises!)
I don't think there's anything wrong with writers like Lavorgna equating luxury products like Patek Philippe watches and Hermès handbags with audiophile gear as in that article. However, I believe this kind of comparison acknowledging non-utilitarian functions of luxury products is incomplete and doesn't get at the heart of why many audiophiles are unhappy with what's often published. The issue is not that we must be cheap as audiophiles, the issue is about being honest with the consumer. With luxury products at luxury prices, I think we have to respect the basic understanding that:

The value of luxury products go beyond the utilitarian purpose. To argue that these products improve utilitarian goals primarily would be a fallacy.

What this means is that when Omega advertises their fancy wristwatch: 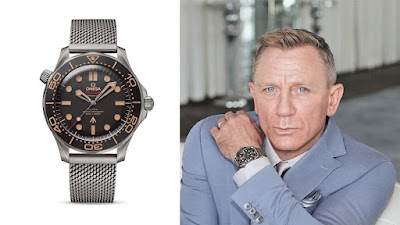 We appreciate that James Bond isn't saying something utilitarian like: "This is easily the most accurate watch I have ever used." Rather, the message is: "This is a very cool watch, and you too can be just as affluent and debonair as this handsome gentleman." That non-utilitarian "coolness" is really what one is paying for; even though I'm sure it tells time very well. The Omega Seamaster by the way is "only" around US$10,000 (many variants out there).
Let's look at a couple examples in the audiophile world.
Is the advertising message we receive from audiophile companies and reviewers like this one recently for Crystal Cables starting at a luxurious US$15,000/m for power cords, similar to the Omega watch?
No, of course not. They dare suggest that this luxury wire (which I agree looks great) also are "the best wires I’ve used or heard", that the "designer Edwin Rijnveld claims a universal improvement in performance", and that "Edwin and Gabi’s new cables, interconnects, and power cords are simply better than other wires I’ve heard — closer to the sound of the real thing, when the source permits."
The argument here is not that it's merely "cool" or handsome to look at, but that the utilitarian purpose - that of sounding even better - is central to the value of these wires. No evidence of course is ever provided in reviews like these that the sound is actually different compared to anything else; it's just faith that you accept the words of the "TAS Staff" that authored this or Mr. Rijnveld's claim that there has been a "universal" improvement (where?). Unlike the subjective eye-of-the-beholder judgment of how "cool" it looks, whether these wires actually transform the sound produced is not a subjective debate but one that surely should be measurable if it's true given the superlatives offered to the potential customer.
Obviously one could, and arguably even should, buy an expensive watch, fancy car, or très chique handbag if desired! That is the free choice of consumers. I champion the rights of individuals so long as the product isn't unethical or illegal in some way of course. To be clear, I also do not believe we must cater our purchases to only objective measurements. As I discussed above in the previous section, I'm actually quite happy with "merely" SINAD 100dB DACs, and non-flat frequency response might be preferable.
Let's use another concrete example to push the point. If an audiophile really wants to buy an expensive Taiko Audio SGM Extreme as discussed a couple weeks back, then sure, go for it! I think many audiophiles will love the non-utilitarian benefits it brings because it looks nice, weighs 100lbs, and many will be impressed by one's devotion to "the best" digital computer audio product on the market (allegedly).
Without evidence however, don't insist that Emile Bok is correct about "matched" RAM modules sounding better. That his special USB card makes a substantial difference. That he somehow has custom USB drivers that will make a sonic difference with bit-perfect data transmission. That he can hear a real difference from the DAC output between PCIe and SATA SSD storage. All such claims without any evidence are questionable based on basic understanding of computers and experience with digital audio. This is true for budget devices, and even more important when you're linking alleged sound quality benefits with very high prices! That again is the heart of the criticism; there appears to be a dissociation between the advertised reasons for why we spend money and what exactly we're getting in return. Snake oil could not perform miraculous cures as advertised back in the day. And likewise, it does not appear that throwing money at many of these luxury products will buy improved sound.
For a consumer to buy based on his/her desire is not a moral judgement for others to make (in this I agree with Lavorgna). If an audiophile friend calls me up one day and says: "Hey Arch, I got a Taiko computer in the system, ya wanna come for a listen?" He would still be a friend even if I believe he could build a superior fanless computer at 1/10 the price. I'd happily pack up some measurement gear and pop over to his place to have a listen and even test it out if he'd let me.
Moral obligation is an issue when manufacturers create claims to entice consumers, especially when they fly in the face of reality and reviewers amplify such claims to make money. There are laws and expectations of "truth in advertising". It's not OK to perpetuate lies and delusions as manufacturers. And it is important for reviewers to balance the needs of the Industry with those of hobbyists to maintain integrity. It would have been nice to see a little bit of that balance and "calling out" the manufacturers who spew nonsense back in the days when Lavorgna was writing AudioStream. Maybe doing that would have garnered more respect among hobbyists for that site. Things got even worse when Rafe Arnott took over both InnerFidelity and AudioStream between 2018-2020. Where are all those articles now? Will articles like "Those Obscure Objects of Desire" at Twittering Machines withstand the test of time, or yet another dead-end attempt to justify the unjustifiable? Think about it...
Happy month of May, dear audiophiles. I've got a few things I need to get done this month at work so might not be around as much. Speaking of THD+N/SINAD measurements, a picture of something I've been playing with over the last few evenings:
Hope you're enjoying the spring and the music!
Posted by Archimago at 08:46:00