A number of moons ago (December 2012), this blog was started to obtain data on ~320kbps MP3 vs. lossless audio. Near the end of data collection for that study, I started performing some tests and began posting them on the Squeezebox forum for discussion.

Over the ensuing months, I started posting data on the family of Squeezebox devices which I collected over the years as the foundation of my sound system at home. Up to this point, I have had the opportunity to measure ALMOST the whole family of products from the SB3 onwards...

Obviously missing from this lineup is the Duet - a combination of the Receiver and the LCD-endowed Controller which I have always wanted to try but never saw a unit locally to buy back in the day. I want to send a big thank-you to 'fordgtlover' from the Squeezebox forum for taking the time and expense to send me the Squeezebox Duet for testing - all the way from Australia no less! 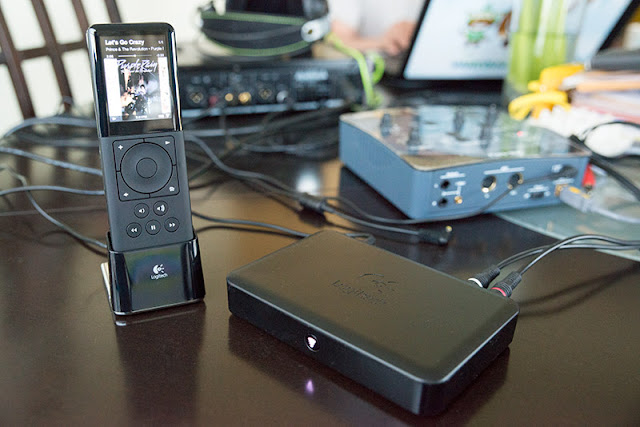 The Controller comes with a nice weighted metal stand which also plugs in as a recharger. The LCD screen is reasonably bright and easy to read. Buttons have a nice click and selection is made with the turn wheel. One could ask for a smoother feel to the wheel, but as is, it's reasonably functional. Even though you can connect the Receiver via ethernet, the Controller obviously needs a functioning WiFi network.

The Receiver is a relatively non-descript black box with just a lit wireless icon on the front to indicate power & device status. Getting it connected up was quite simple and quick using the Controller - see here for the details. 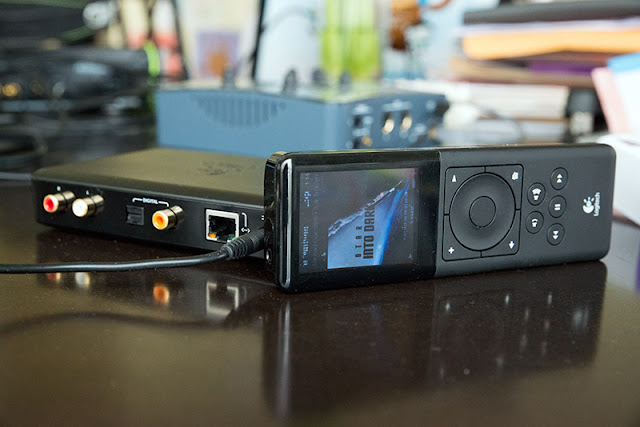 A look at the back ports on these devices. From left to right of the Receiver: analogue stereo, TosLink digital, coaxial digital, Ethernet (10/100), and wallwart power (9V, 0.56A). You can make out on the top of the Controller a phono plug as well for audio output to headphones on the go.

Internally, the Receiver uses the Wolfson WM8501 which is spec'ed at 100dB SNR and although it can go to 24/192, the Receiver is limited at 24/48 (as are all the other Squeezeboxes except Transporter and Touch).

Okay, lets get into it. First I wanted to have a look at the analogue outputs of the Receiver. Since this is a loaner unit, I'll try to extract as much as I can before sending it on the long journey home to Australia... 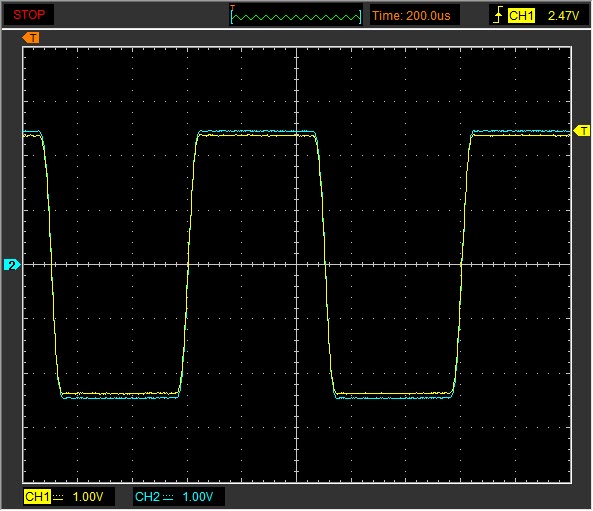 The yellow channel is the right, and blue left. Notice there is some channel imbalance on this unit with the left channel a bit louder. Left channel peak voltage measures at 2.47V, right channel 2.40V.

The square wave itself looks nice. Minimum noise, good contours with minimal ringing (compare with the Controller below). From this, one would suspect that the usual RightMark analysis would show good results. 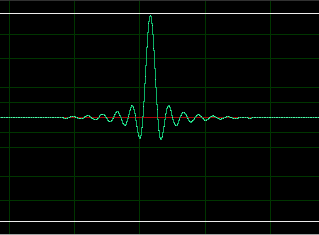 A standard linear phase filter response. Absolute polarity is maintained. We can therefore expect a sharp roll-off at Nyquist.

Cables were the same for all these measurements (a 3' shielded RCA cable from Radio Shack, shielded 6' USB cable).

I tried both ethernet and WiFi. Since I could find no difference, I'll just present the WiFi data here. I noticed that the WiFi in the Receiver was able to achieve better signal strength than the Touch at the same location. 2 floors up from the ASUS RT-N56U router, my Touch got ~65% strength, while the Receiver was up at ~75% (Controller also about 75%).

Where I did the measurements, the Receiver was up around 85% WiFi signal strength.

As you can see, I measured the Receiver against the Touch all the way up to the max sampling rate of 24/48. Also, I included the 24/44 data from the Squeezebox 3/Classic as comparison. The graphs below are derived from the 24/44 data. Notice that we gained 4dB from 16 to 24-bits using the Receiver...  Not much. 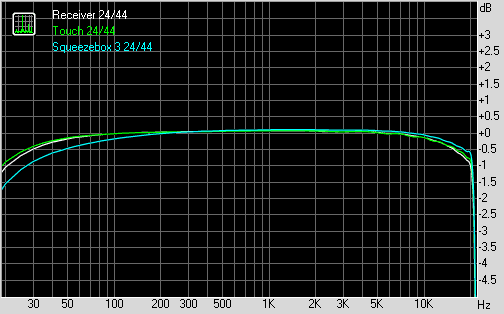 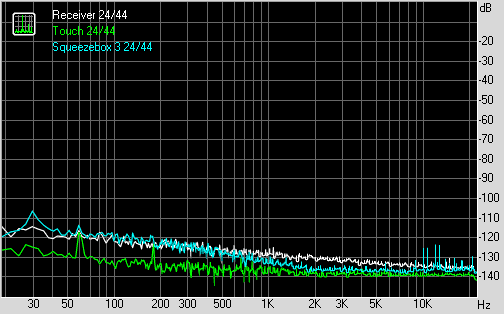 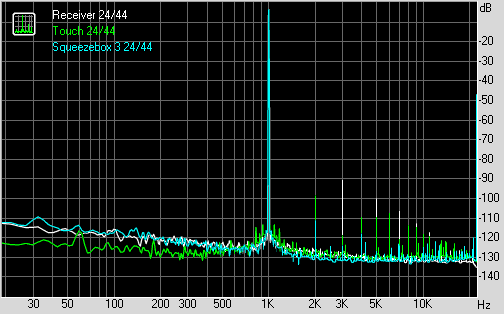 Relatively stronger odd-order harmonics up at 3, 5, and 7kHz compared to the Touch or SB3. 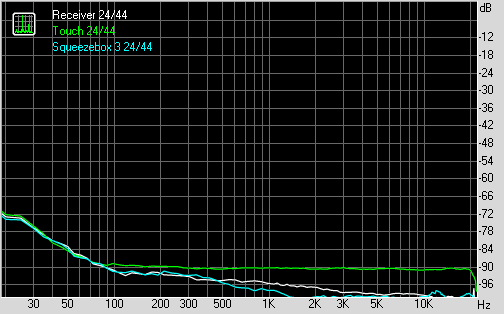 As you can see, a mixed bag. The Receiver's frequency response is similar to the Touch; both are flatter than the SB3 which tends to roll off the deep bass a bit more. The Touch clearly beats the other two in terms of noise performance (SB3 and Receiver about equivalent here), but scores lower with stereo crosstalk (not really an issue IMO). Total harmonic distortion was higher with the Receiver. 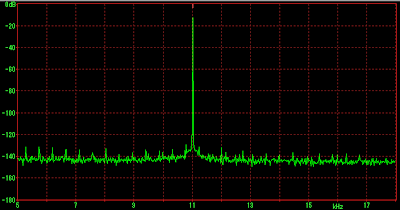 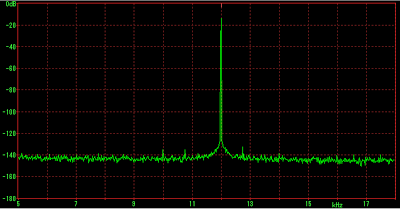 Low jitter using this test in the analogue output.

The controller is a neat device. As shown above, there is a metal charging base and it's motion sensitive so will automatically wake when picked up (a few seconds wait time to wake up if not in the charger). It's pretty good at doing what it's meant to - as controller for the various Squeezebox units (not just the Receiver). The scroll wheel allows accelerated item selection, but these days, I mainly use a tablet to control the Squeezebox devices and it's of course quicker to type in search items than scrolling through letters.

The Controller has a standard 3.5mm phono plug up top for headphones. Although it can also play back audio, as far as I know, this feature was implemented at a "beta" level only. You have to go into Settings -> Advanced -> Beta Features -> Audio Playback to turn this on. Because the unit has a little speaker inside, I also needed to download the "Headphone Switcher" app from Applet Installer which adds an item in the "Extras" menu to turn the headphone on. Eventually I was able to get the unit to automatically switch between the speaker and headphone after some fiddling and rebooting the device (honestly I don't know which step was the key - the nature of 'beta' I guess). I did notice some slowdown to the UI responsiveness when streaming audio to the Controller.

According to the SB Hardware Wiki, the Controller has a Wolfson WM8750 inside. Understandably, this is a low power chip meant for portable devices. Data sheet lists DAC SNR up to 98dB. Maximum sample rate goes up to 24/48.

Here's what a 1kHz square wave, 0dBFS, 24/44 looks like under the oscilloscope playing off the phono plug: 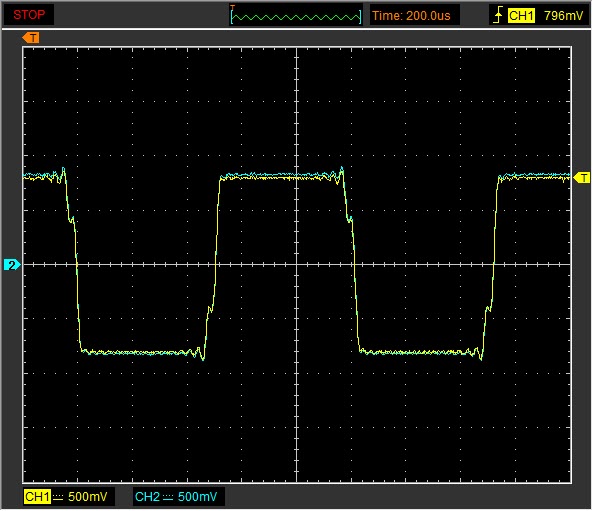 In comparison to the Receiver above, it's clear that this isn't going to be "hi-fidelity". There's a bit of ringing and noise evident. Peak voltage is around 800mV and the two channels are reasonably balanced. 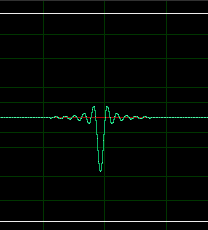 Comparison is made with the Receiver and Touch. Numerically, the thing that really sticks out is that massive intermodulation distortion up at 4%! I'm a bit surprised how the program did not calculate a higher THD as well given how nasty the graph looks - this is why I post up the graphs as well... I checked and double checked the testing to make sure settings were not clipping the signal. Made no difference - it is what it is!

No meaningful improvement with going to 24-bits. 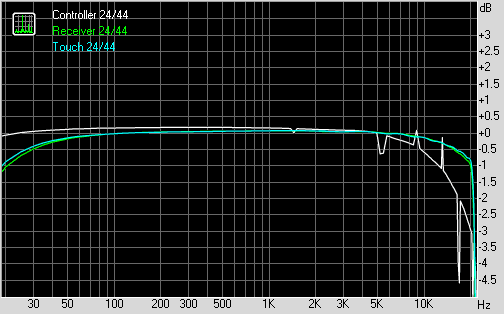 Odd noise spikes from 5kHz up. Have not seen this before in my other tests. I did the test 3 times and this appears to be a real finding. Also, earlier roll-off down to -3dB by 20kHz. 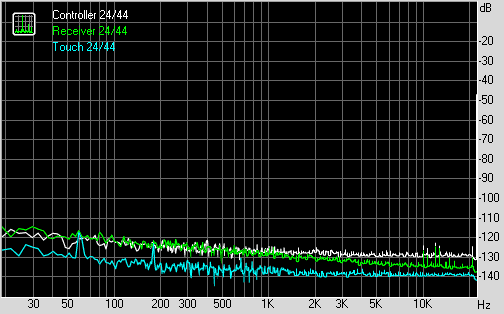 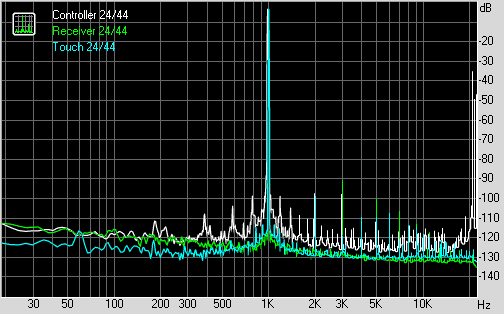 This looks bad but the score was about the same as the Receiver. RightMark is probably just looking at the odd and even harmonics for the calculations. 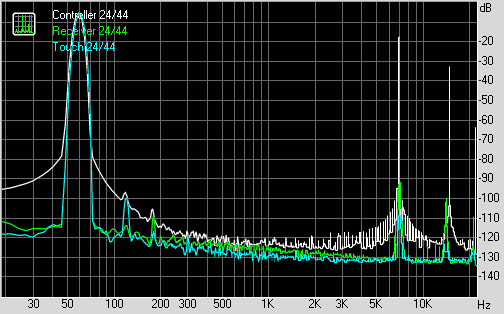 Ouch. Non-linearity is an issue. 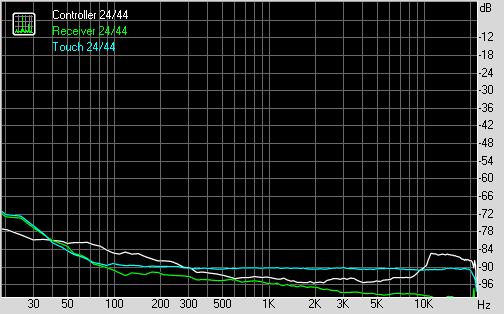 As I said earlier - the Controller isn't high fidelity :-). 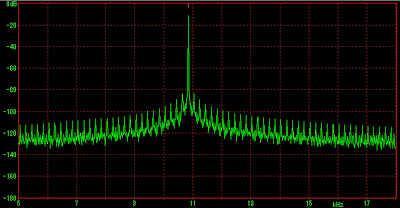 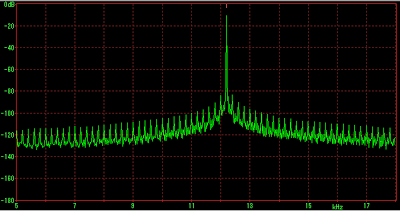 Very strong jitter! Many many nanoseconds of jitter :-). Again, this is not distortion from clipping.

Receiver: Reasonable analogue output from the device. It performs similar to the old SB3 in terms of dynamic range and noise floor. I hooked up the Receiver to my bookshelf system upstairs ('vintage' Sony MHC-1600 from university days powering some Tannoy mX2's) for a few days to listen. Very enjoyable - got a chance to listen to the Into Darkness soundtrack, the recent HDTracks release of Cole Español, and stroll down pop memory lane with Samantha Fox's Greatest Hits :-). I pulled out the Squeezebox 3 to compare and subjectively, I agree that there's a bit more bass with the Receiver and Touch than the SB3. While that channel imbalance was measurable, I didn't find any gross anomaly with the speaker system but I could hear the difference with the AKG Q701 headphones for example listening to where Ella Fitzgerald's voice was centered on Ella Sings Gershwin, I'd say it's subtle so would not affect my listening pleasure (could also be placebo since I was specifically listening for this!).

Controller: Firstly, how does it sound? Well, perhaps surprisingly OK :-). It's low powered so I listened with a pair of JVC HAFXC80 IEM headphones. I would compare the sound output to what I hear off my Samsung Galaxy S2. If you have a Controller, have a good listen - that's what a high jitter device sounds like (I have not ever seen this many side bands in all the testing so far!). For me, the best I can describe is that the Controller sounds "distant" even with volume pushed up and slightly "hollow" compared to listening through the headphone out from the Touch. The percussion at the start of Star Trek Main Theme from the "Star Trek: Into Darkness" soundtrack for example sounded less defined and spatially smeared, getting worse as the orchestral dynamics build up as if there's some low-level static in the background. How much of this can be definitively attributed to the high jitter is hard to say since the unusual frequency response, noise levels, intermodulation distortion and headphone output limitations are all significant factors in the sound. I highly recommend just streaming 192kbps MP3 as this will improve the responsiveness of the Controller and you're not going to hear a difference.

"fordgtlover" wanted to know how well the Receiver serves as a digital transport - good question! This then will be the topic for the next installment along with comparisons with the Touch... Stay tuned... Something tells me this is going to be complicated and hopefully quite interesting!