Well, after finishing the last couple of posts, I sent the Squeezebox Receiver back to fordgtlover. Thanks for the opportunity to test out another member of the SB family! I very much appreciate the generosity!

Before the Receiver left on the long trip back to Australia; I decided to take a family portrait: 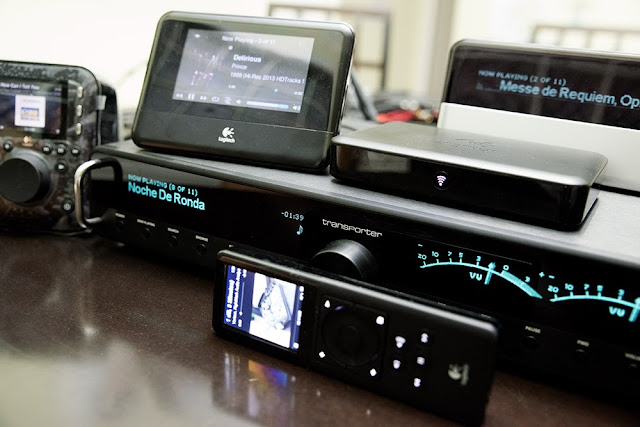 I remember patiently awaiting the arrival of the Slim Devices Squeezebox 3 back in late 2005 after putting in the pre-order. It's thanks to this little device that my audio listening habits changed forever away from physical media. Despite the ups and downs with various versions of the server software, these little boxes have certainly made access to my own music remarkably easy in a way almost unimaginable previously. My father has access to my music library across the city through his Touch and wherever I go in my travels, music streams to the PC/Mac as well. The stability of my server these days with >5000 albums is fantastic with uptimes of months (this is with Windows, and the only reason it goes down these days is because I install Windows updates every few months).

Sadly, the Squeezebox line was discontinued in August 2012 by Logitech.

Looking back, I'm still impressed by the technology put together by the Slim Devices team to get the infrastructure in place, and later with the Logitech team and especially the Touch. Even today, the objective analogue audio output performance of the Transporter remains superb (it came out in September 2006) and as I look at all that can be done with the Touch (came out April 2010) including the ability to handle 24/192 (EDO kernel), communicate with a number of USB DACs, transport DSD64 via DoP, it's amazing the power of what can be done with an Open Source architecture where the "community" is empowered to maximize the machine's capabilities. Have a look at the used prices of the Touch these days, it's a reminder of just how much value it offered audiophiles. The computer audiophile community needs more devices of this caliber; devices that can "raise the bar" and do it without need for valuation as a luxury or "artisan" item when it's just "good sound" and "good functionality" that I believe many of us are after.

Looking ahead, it's great to see ongoing development in the Squeezebox community towards replacement hardware and software - check out the communitysqueeze.org FAQ. Wonderful to see the DIY machines being put together out there (check out the picture gallery!). With the availability of small, low powered, but reasonably fast computers like the Wandboard and the already ubiquitous ports of client software like Softsqueeze/Squeezeplay/Squeezeslave, Squeeze Player (Android), Squeezecast (iPod/Phone), I have a feeling that I'll be running my Logitech Media Server (or some equivalent) for the forseeable future...

... Now, if they could support multichannel FLAC/WAV and native stereo/multichannel DSD (I still think there's a need for better file formats than .dsf and .dff), I think we'd have all of audio covered. :-)

Well, it's summer time in the northern hemisphere and that means the kids are out of school. The heat wave finally arriving here in Vancouver. Time for some vacation, BBQ's, camping, lazy afternoons, general R&R, and of course good summer tunes (Katrina & The Waves I'm Walking On Sunshine is playing in the back currently). :-)

I'm also starting to go through Ethan Winer's recent 2012 book "The Audio Expert: Everything You Need To Know About Audio". Only started and already it's a good read written in an accessible manner for those interested in the science and technical aspects of audio without going deeply into the math. The Kindle edition (IMO a bit pricey) along with some mindless fiction like Dan Brown's Inferno will likely accompany me on the summer trips coming up.

As always, enjoy the music everyone!