Guys, check out this video from Harman:


Check out the segments from 11:30. LOL. Somebody has to go back to school and learn the difference between data compression (ie. MP3) and volume compression (ie. crappy engineer) as demonstrated by those waveforms. On the one hand they say they want to sell "better" sounding recordings but they're obviously going after the scapegoat (MP3) instead of the real culprit - themselves. The ones who allowed their recordings to sound like crap. The ones who apparently never listen to their own recordings or allow their own engineers to volume compress to death in the "loudness war"... Geez... Hans Zimmer talking about "filling your soul" when his own Dark Knight Rises from 2012 has a DR of 7 for an orchestral soundtrack on CD and 24/48 HDTracks! Do you think that MP3 was to blame for that, Hans? Shameful. 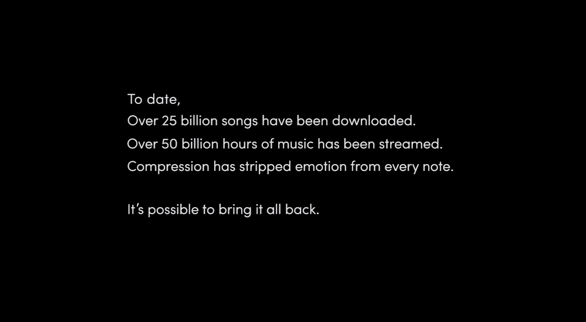 Folks, we have a problem here. Just who is the audience they're targeting? Why would Harman produce this video - they want to sell more CD players or something? I've seen some comments about this leading into their DSP Clari-Fi system which sounds like a fake surround algorithm to me - I want the real volume uncompressed audio, not a DSP reconstitution, thank you (here's another opinion). But with a general comment as in the screen capture, they seem to have a problem with downloads (presumably all downloads including lossless), and they have a problem with streaming (presumably all streaming no matter the bitrate and maybe including lossless). To obfuscate the term "compression" as both volume compression (poor DR) as well as data compression (MP3) totally damages credibility here and understandably would frustrate if not insult any reasonably knowledgeable music lover / audiophile (especially ones who have tried blind testing high bitrate MP3!).

In sum: "Please consumers. Audio files and streaming suck. Listen to albums start to finish because artists put a lot of work into sounding good. Buy physical." Somewhere in there is the allegation that the physical (LP, CD) sounds better with no real evidence (oh yeah... that non-scientific head bobbing observation). A desperate plea to increase physical sales?

Yeah... Good luck with that. What a mess of a "documentary".