Shortly after my last post on the wow & flutter measurements with the Technics SL-1200 using the 7" test disk, Frans suggested in the comments a test using a CD to demonstrate what the results would look like using digital devices.

So, I whipped out good old Adobe Audition and generated a -10dBFS (same level as the Test LP signal) 3150Hz (for 33.3rpm) sine wave. I burned it on a standard Maxell CD-R - first time in a long time I've burned an audio CD!

To purposely not do anything special to reduce the "potential" for jitter (NB: I don't actually believe this anyway), the disk was burned at 48x on an older LiteOn iHAS DVD burner which I got either in late 2011 or early 2012. I did verify the burn to make sure the data was readable.  I used my electrically "noisy" quad-core home assembled i7 workstation to do the burn as well. Despite the strong temptation, I did not use any green "Stereophile recommended" StopLight pen to color the rim of the CD to improve the sound :-).

For the graphs, remember to look at the scale on the left to get a sense of the magnitude of frequency variation. I've aimed at measuring over the course of ~60 seconds.

To start, let me just show what the results look like with my network devices streaming off my server computer before I throw the CD into a few spinners: 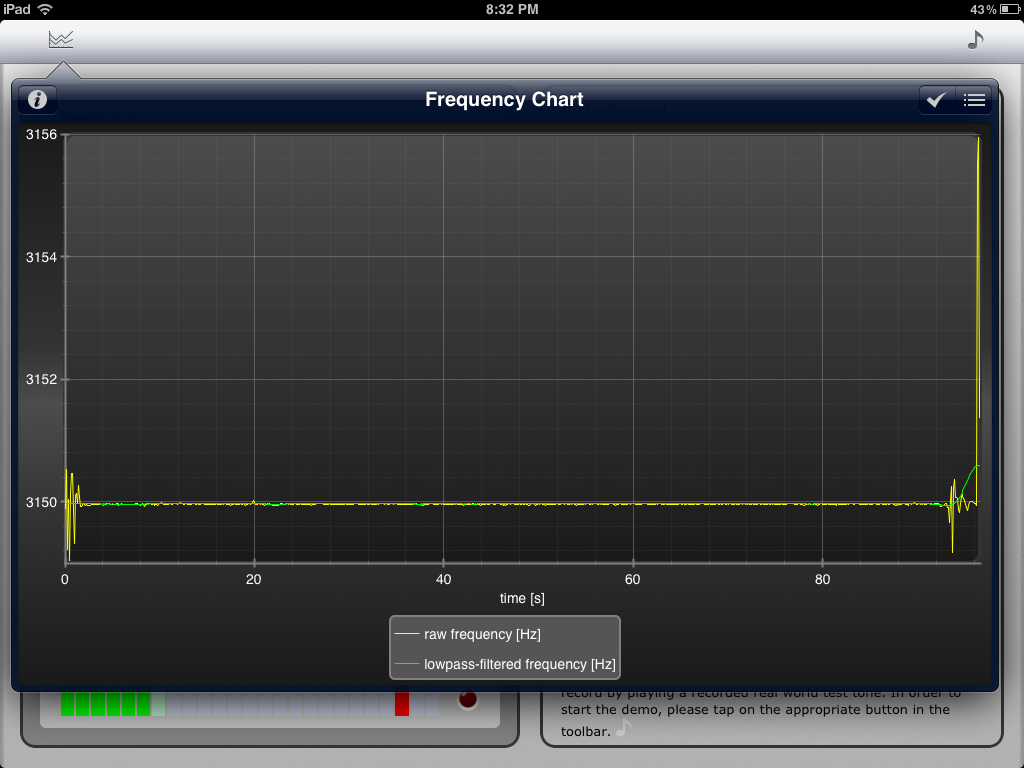 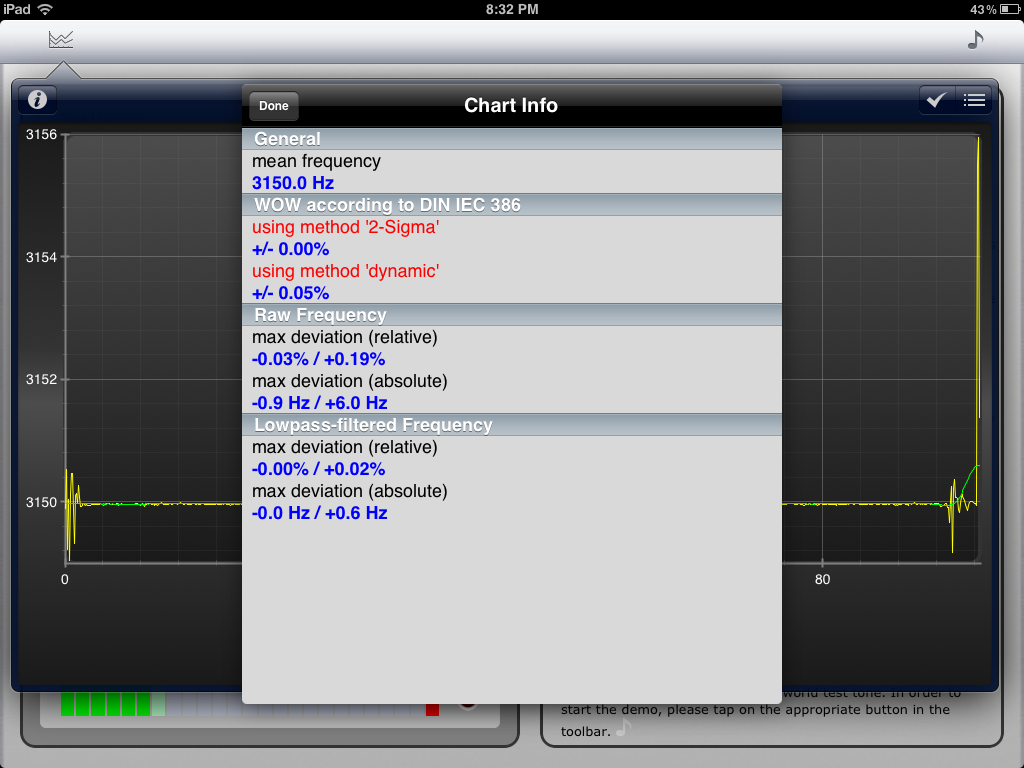 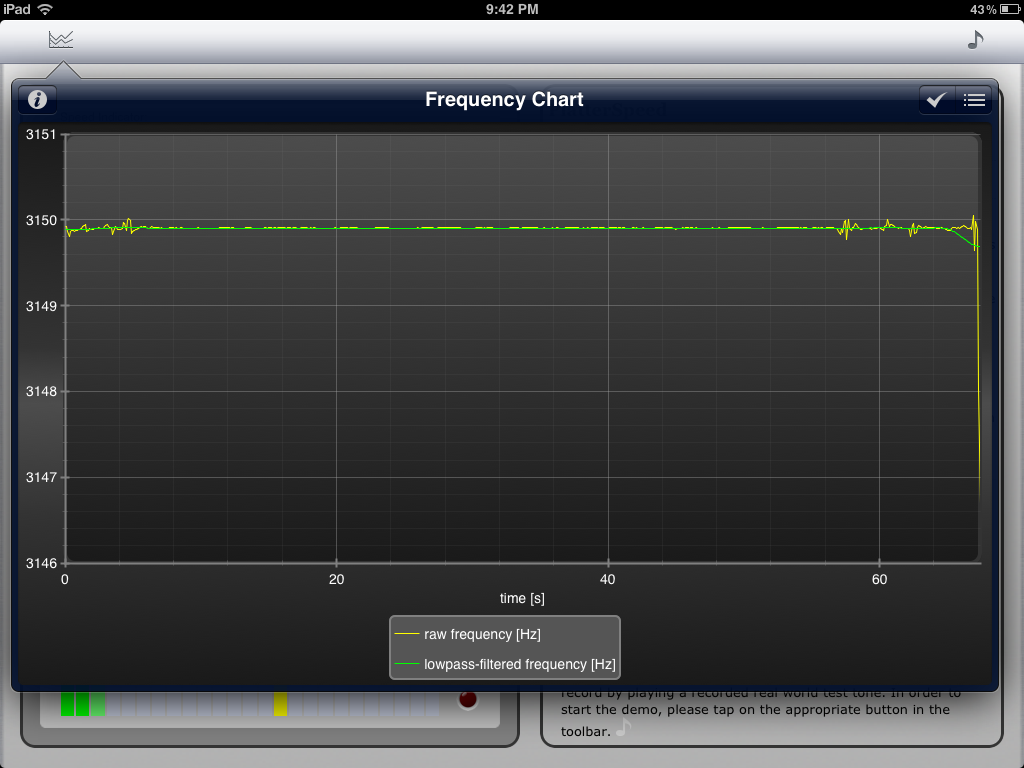 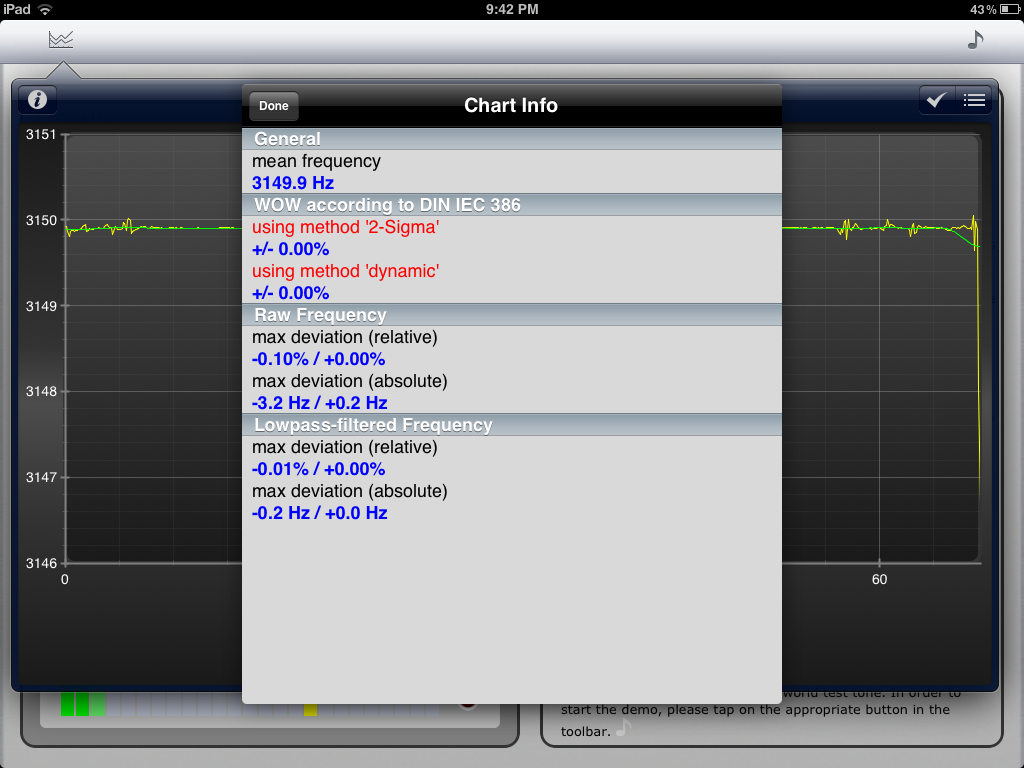 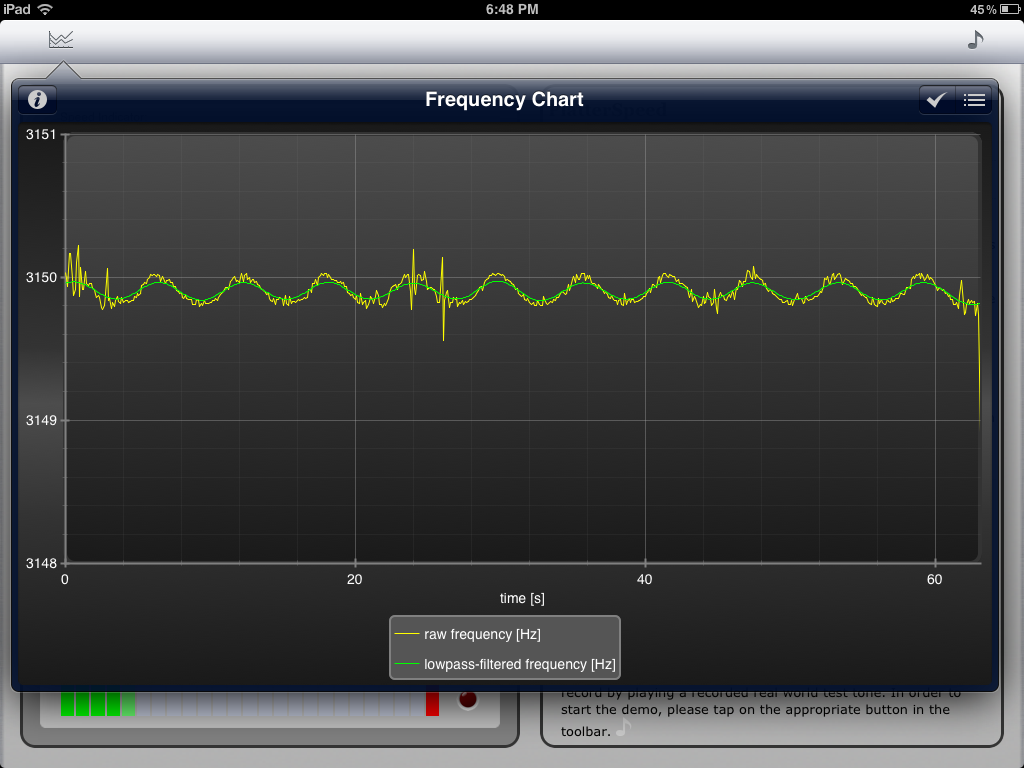 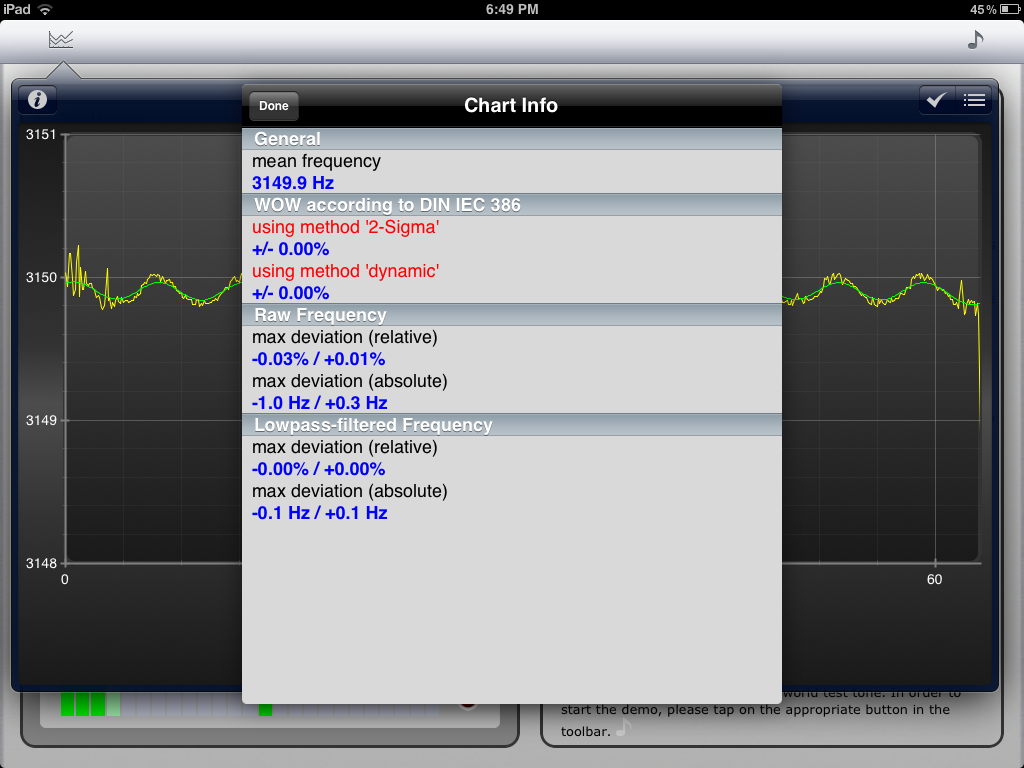 Home Theatre PC to TEAC UD-501 DAC via USB using JRiver Media Center 19 to stream the shared file off my server machine in another room in the house (essentially the typical PC-DAC setup): 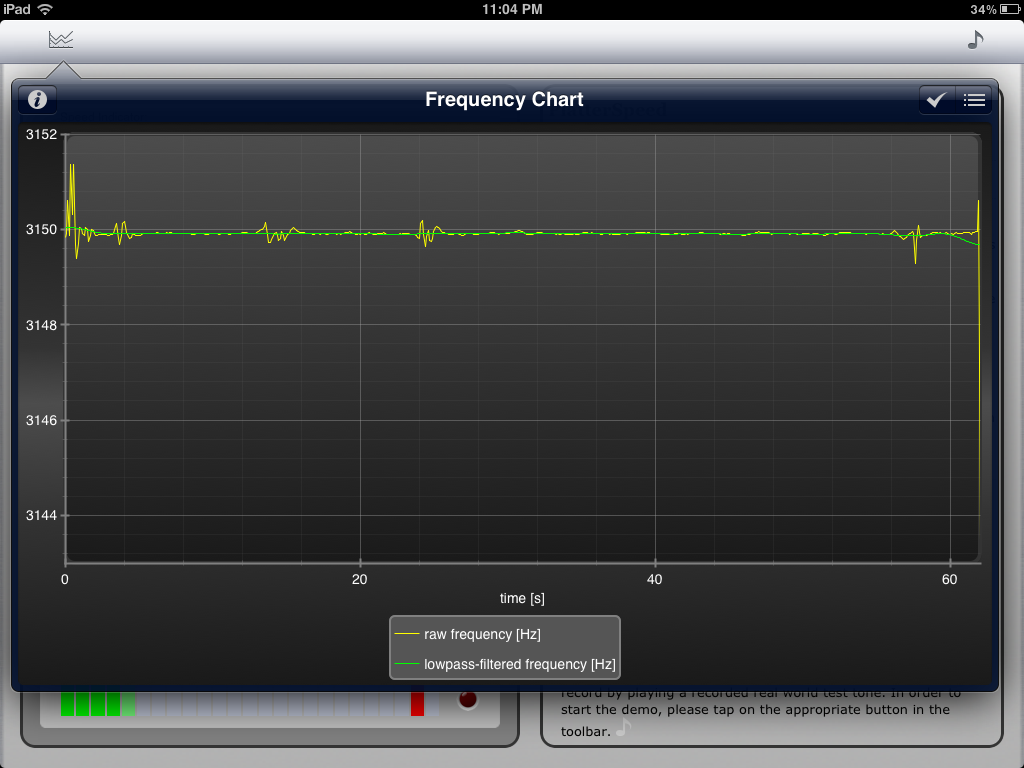 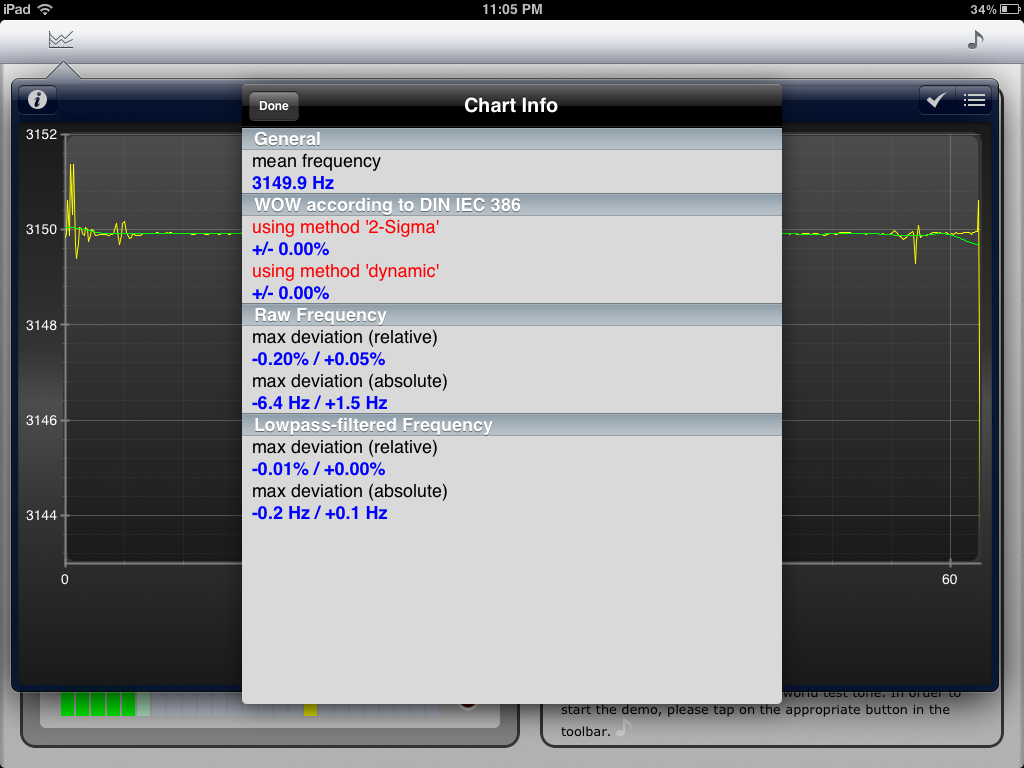 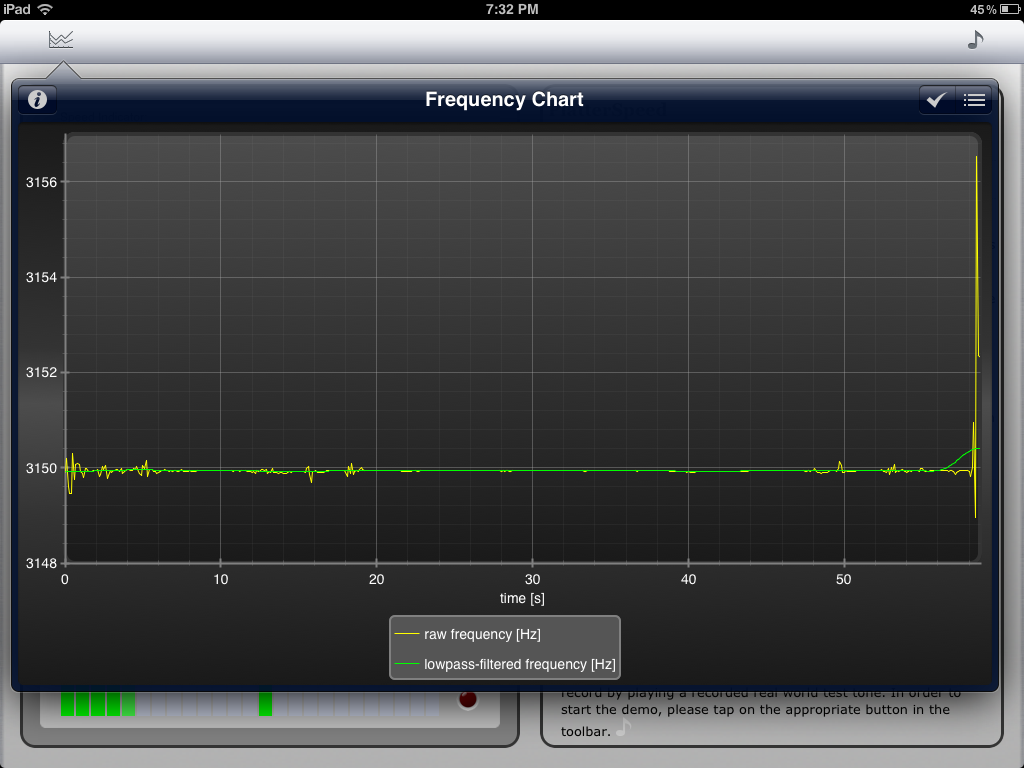 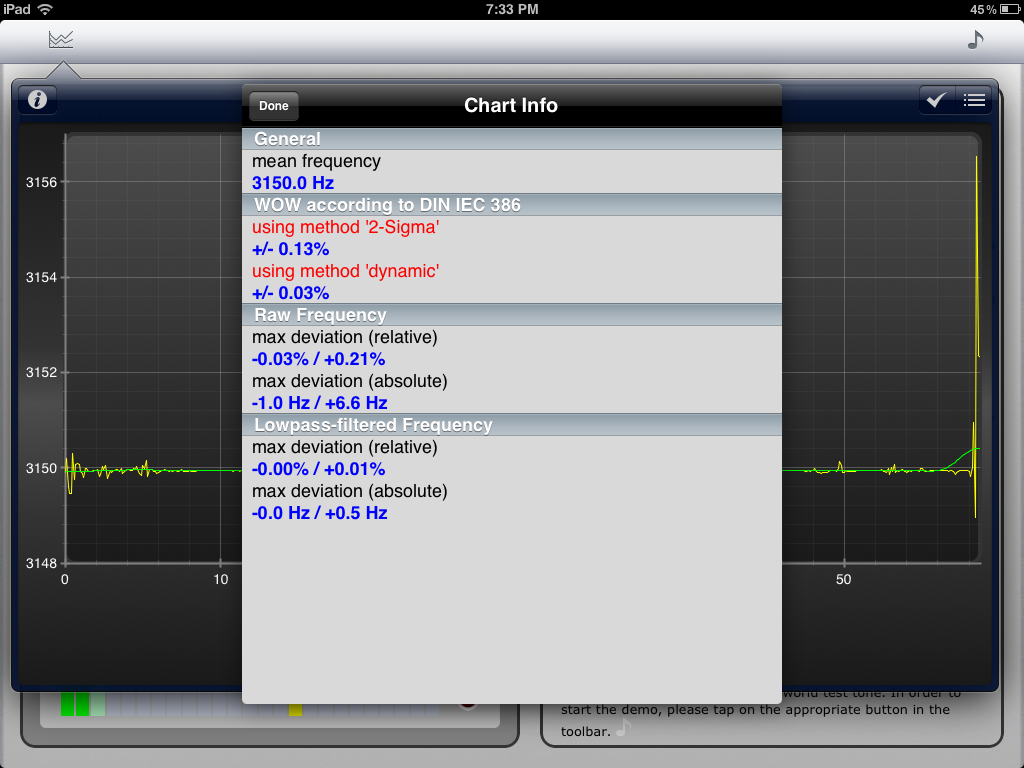 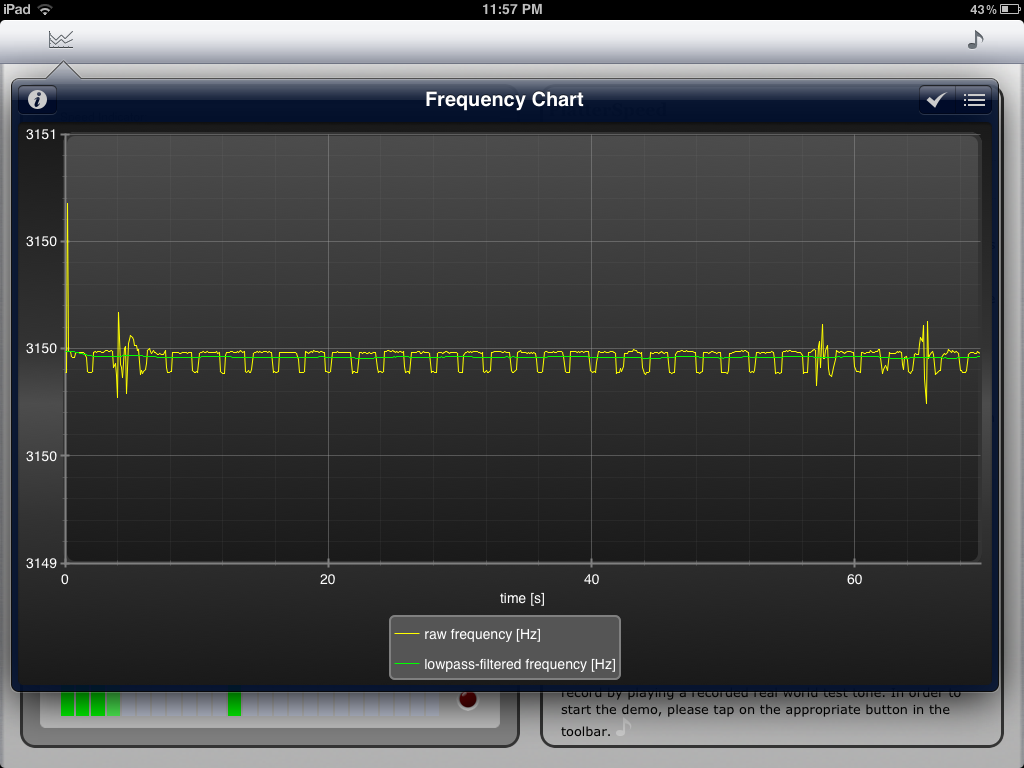 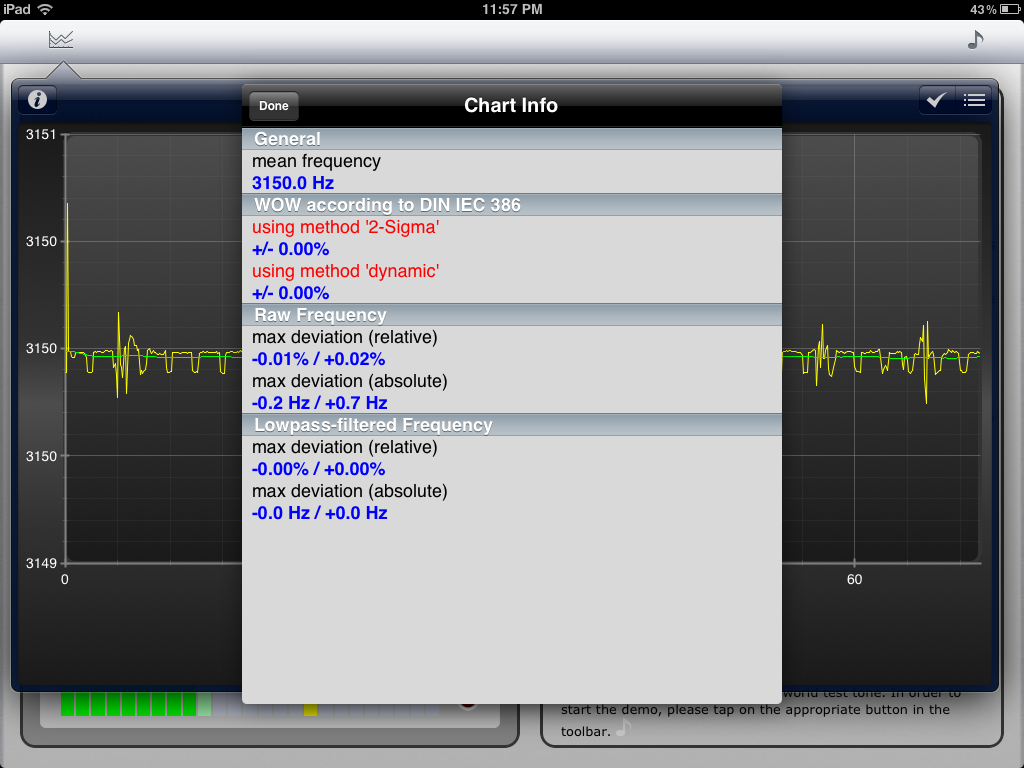 "Lo-Fi" Sony CFD-S05: Finally, my lowest fidelity device that plays a CD; an all-in-one cassette / CD / radio. About $70 and worth every penny just to play the occasional cassette tape :-). 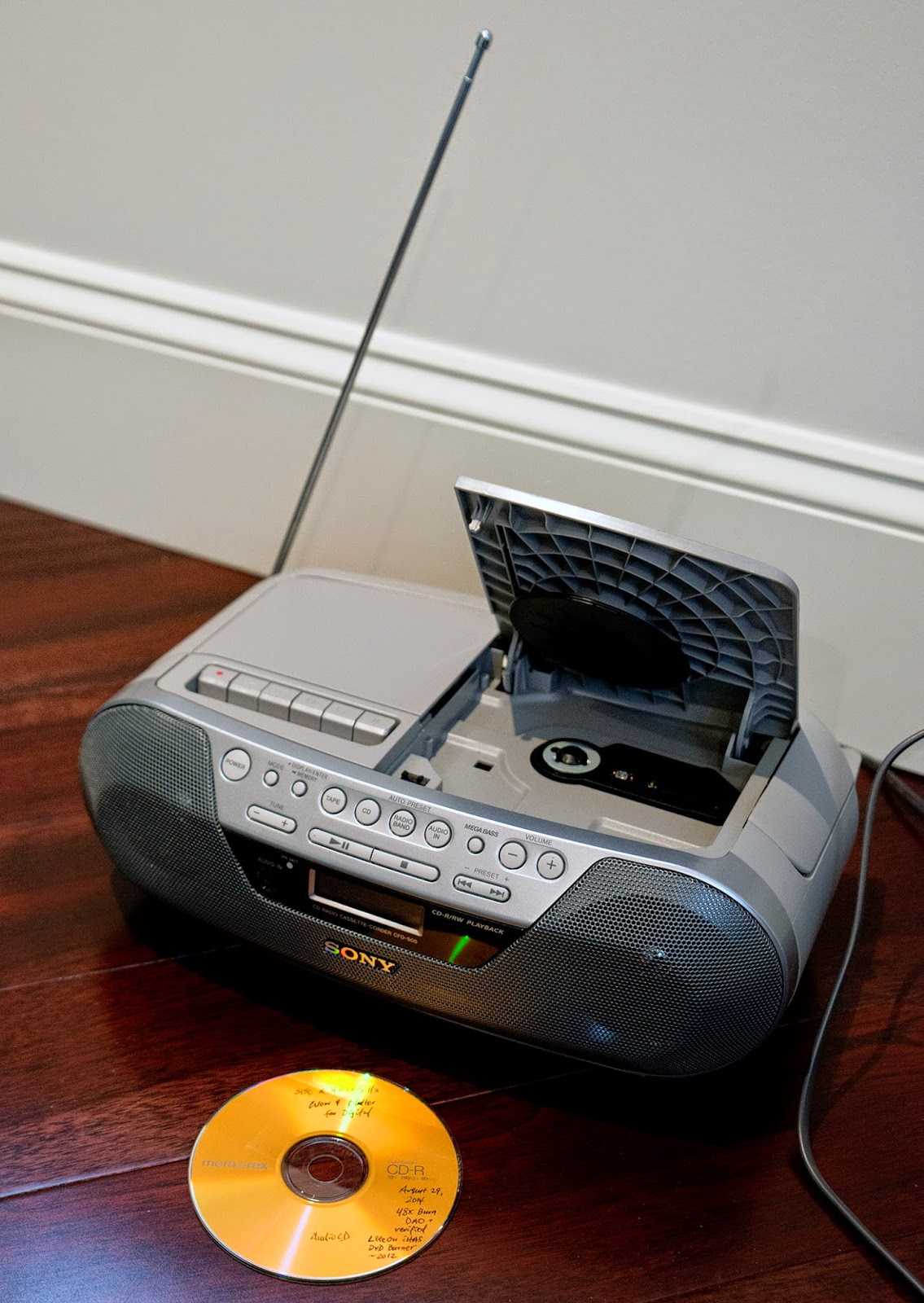 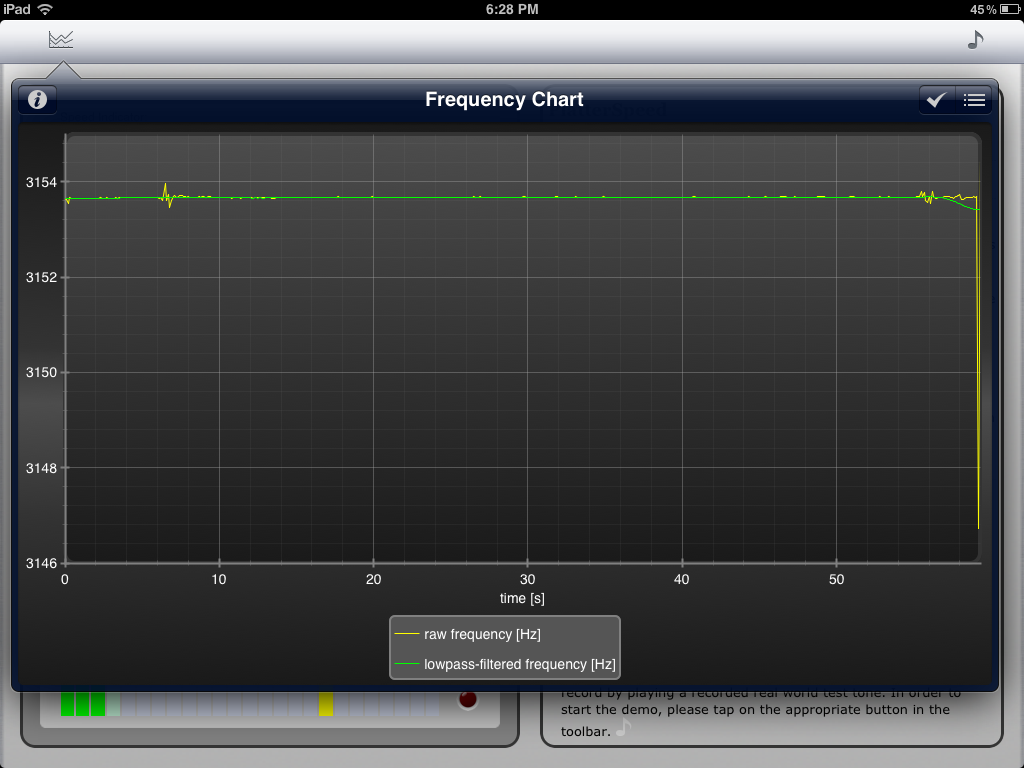 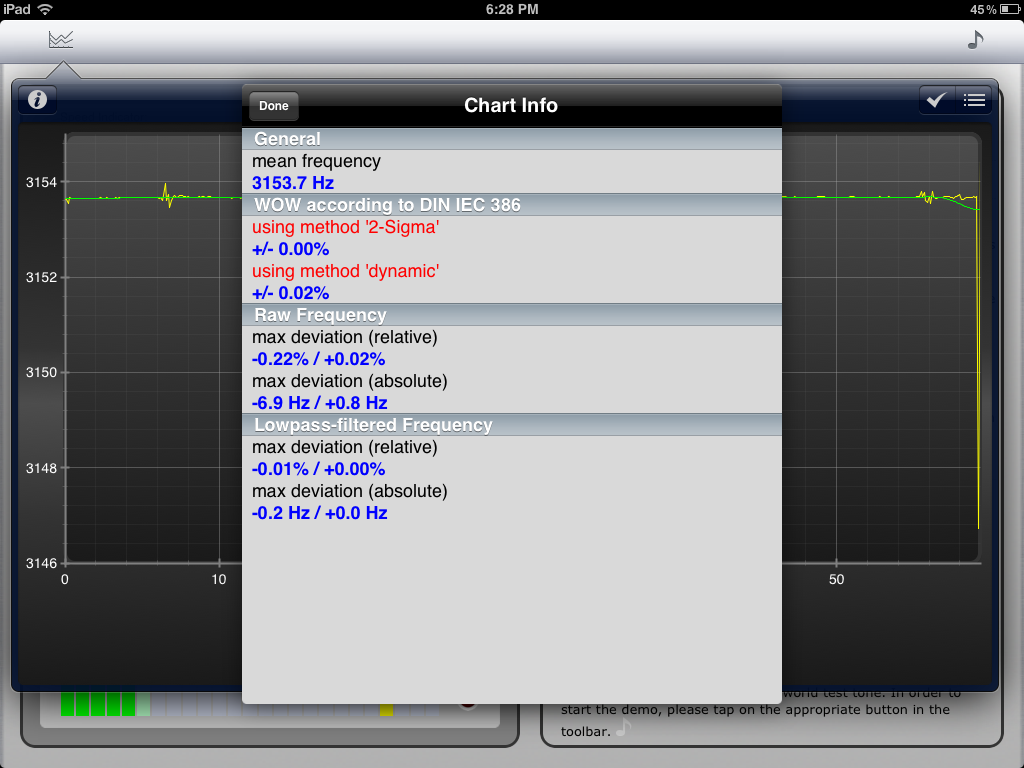 So, what can we say looking at the above graphs and numerical summary? Exactly what the jitter measurements over the last year or so suggests. Timing anomalies as can be detected in frequency shifts are minuscule in the digital world compared to what is seen with a turntable set-up. Dunn J-Test utilizes detailed FFT analysis to look for tiny sideband distortions which typically show up below -100dB with most decent DACs these days. There is a world of difference between what's found with the J-Test compared to the timing errors with typical turntable measurements as reported by tests like PlatterSpeed.

Looking at the mean frequency (remember, target exactly 3150Hz), every one of the devices achieved essentially perfect scores except for the inexpensive "lo-fi" Sony all-in-one (average 3153.7 Hz). Even with the Sony, my guess would be that this is due to the low fidelity speakers or "defective by design" (remember the poor frequency response) rather than an underlying digital timing inaccuracy.

If we look at the "raw" frequency graphs, we see that the major variation is at the end when I press the STOP button and the iPad is picking up the "click". Otherwise, other than the Logitech Boom and the i7 computer connected to the ASUS Essence One with very low levels of frequency undulation (I've seen this with the Essence One before with the USB interface but not with SPDIF inputs), the rest of the plots are flat lines. I am impressed by the iPad and PlatterSpeed app for being able to pick up tiny <1Hz variations.

As for the numerical analysis... Frequency fluctuation results are essentially perfect across the board and better than any turntable set-up; this includes the inexpensive Sony all-in-one CD player. The small deviations are for the most part just the bits of ambient noise or that "click" at the end being detected.

Is any of this surprising? Of course not. It doesn't negate the fact that a good turntable system can sound very good, but is a reminder of the technical limitation of a physically spinning turntable and of human hearing (ie. a non-specialized "instrument" like the iPad can pick up imperfections easily, more so than the threshold of hearing that would interfere with enjoyment of music). In fact, we might even hypothesize that a small amount of wow and flutter using a turntable adds to the "texture" of the sound, making it less "digital" sounding perhaps.

No matter how one views it, these results are a reminder for those who aspire for "high fidelity" as synonymous with "high accuracy" that digital is clearly superior (at least in the time domain as per this discussion). I was frankly surprised how well the little Sony "lo-fi" fared, actually!

Well, it was a blast zip-lining and white water rafting over the Labour Day long weekend! It's September so time to get back to work full swing... Hope everyone had great summer months in the northern hemisphere :-).

As the rainy and cool months approach here in Vancouver, I'm looking forward to some quality listening in the 'man cave'... Enjoy the tunes, everyone...