PREVIEW: A Look at the Light Harmonic Geek Out V2...

Well... I guess the good thing about not being a "professional" audio reviewer is that while on holiday, playing with my toys isn't really considered "work" :-).

Here's what the postman brought earlier this week: 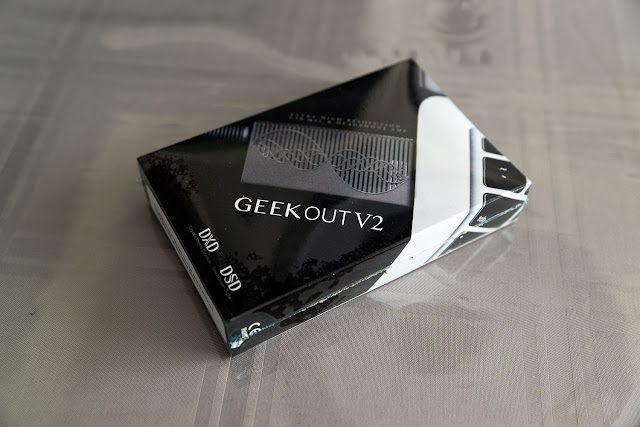 From a bang-for-the-buck perspective, I suspect you can really get a lot of quality from the small "USB stick" type DACs. The reason being that manufacturing costs can be quite low with these devices. There's no need for fancy LCD screens, no need for a large enclosure (made of milled aeronautical aluminum of course!), no fancy connectors other than the USB port and some headphone jacks. The challenge of course is in making sure that noise levels are low in the analogue output given the proximity to the computer and dependence on the power rail off the USB port.

Previously I had already tested the AudioEngine D3 and AudioQuest Dragonfly 1.2 DACs... This time, enter the Light Harmonic (LH Labs) Geek Out V2...

As I suspect you must have heard elsewhere, within the world of high-fidelity audio, LH Labs is notorious for using crowdfunding campaigns like Kickstarter and Indiegogo to get products out. Like any complex business proposition, there are risks and rewards which I don't think we need to go into detail about here... Typically, as in this case, the project is a type of "Rewards-based Crowdfunding" where backers provide funding up-front. When it works, it's great for the manufacturer who secures no-interest seed funding by pre-sales and can be a great marketing tool as witnessed by the first Geek Out or with the PonoPlayer. As for consumers, this mechanism provides an opportunity to see something desired come to fruition (and pride that "I helped make it happen!"). The first product from LH Labs done through crowdfunding was of course their Geek Out V1 in 2013. Since then, they've literally been at the crowdfunding "watering hole" for each of their products like the Geek Pulse DAC, Geek Wave, etc... Honestly, I haven't been following the story too much but I do know there have been controversies over the years; publishing Geek Out measurements against competitors, Geek Wave still not out with various confusing perks and configuration changes, apparently abysmal Verb headphones. And of course for me any company that sells ridiculously priced USB cables demands vigilance in sniffing out the hype...

Nonetheless, I do at least respect that they dared publish measured results which at least tells me that they respect the importance of engineering quality. (Hey, with a name like "Geek", they better have some graphs and numbers to show for it considering the evocative title! Go read all the tech specs at the Indiegogo post.)

I don't know about the other products, but given that they did produce the Geek Out V1 successfully and since the V2 evolved from that lineage, I figure it wasn't a big risk to plunk some money down on Indiegogo and get myself one of these. I opted for the "basic" model... There's an "Infinity" model with supposedly lower noise, another digital filter mode, and 450mW output compared to the standard switchable 100/1000mW modes. I got it for the "early bird" price - $235USD + shipping. This would actually be my first ESS Sabre DAC that I own (although previously tested both the Oppo BDP-105 and Dragonfly based on ESS chips) and if it measures really well as claimed, it would be a nice little "platform" to run measurements off of for comparisons in the future. The DAC chip is the new ESS Sabre9018AQ2M released back in January this year.

Here's what's in the box: 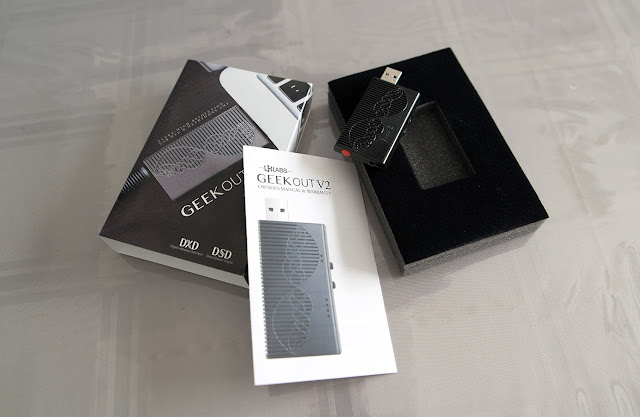 Nothing fancy. Box outer cover, foam protector to cuddle the device in, the USB "stick" itself, and a folded manual. You need to download the Windows/ASIO driver (starting with version 2.29 for V2). It installed without a hitch on Win 10. As usual, Mac OS X natively supports USB Audio 2.0 Class without special drivers. Needless to say, a real shame that Windows 10 still doesn't do native USB Audio 2.0.


Here's a look at the device itself: 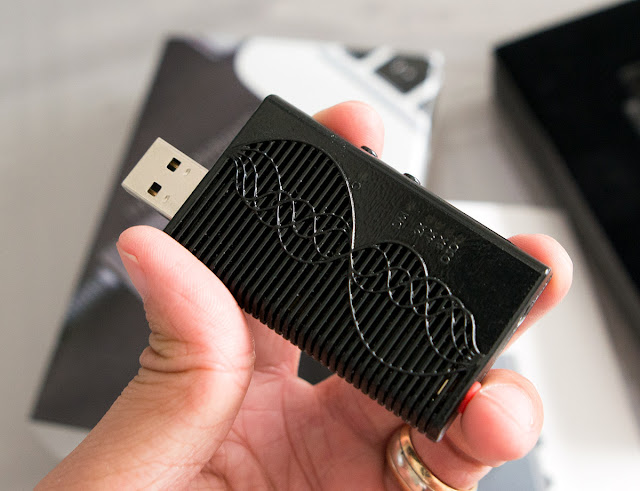 It's a deep black 3D printed case that exuded a bit of a musty smell when I first opened it - I don't know if 3D printing smells like this in general or the material chosen. Fit and finish not bad but some rough edges could have been smoother. The smell settled over a couple days. To the bottom right where my finger is you can see the red plug which protects the TRRS balanced output labeled "BAL", whereas the open phono jack just above is "SE" for single-ended which one would most likely be using. Don't accidentally plug your single-ended headphones into the balanced jack - could cause some damage! If anyone knows of a source for cheap 1/8" TRRS --> dual XLR cables, let me know... This is a different arrangement than the PonoPlayer's dual 1/8" TRS balanced outputs.

Like the previous Geek Out V1, there are some LEDs on the top. Closest to the metal USB connector is "G" for gain stage. It turns from white (100mW, default reset each time plugged in) to blue (1000mW) with the press of the adjacent button; the increase in volume is obviously audible. The first LED in the cluster below that says "DM" for Digital Mode - basically 2 digital filter settings toggled with the other side button. "TCM" (Time Coherence Mode) for a minimum phase setting when lit blue, "FRM" (Frequency Response Mode) when green - some kind of slow roll-off linear phase filter... We will see what the measurements look like when I run some tests. (The "Infinity" model also has another setting that makes the LED turn red - I cannot tell what kind of filter this is based on the hyped manual description; something about "optimizes the timing of audio being played from streaming sites".)

Considering that the headphone amp runs in Class A mode (based on TI TPA6120A2 opamp), this baby needs quite a bit of ventilation especially since it is now encased in plastic rather than heat-conducting metal:
Indeed, this unit does run quite hot. The manual indicates that it's normal for the PCB surface to run 65-75 Celsius... I believe it! The enclosure gets warm but not burning to the touch even at 1000mW output after a few hours. This is certainly one good thing about plastic - low thermal conductivity; it doesn't act like a heatsink so at least it's not terribly hot to the touch.

Impressions from the listening sessions using headphones have been positive so far. The 1000mW is as claimed - a lot more powerful than my other USB DACs tried (AudioEngine D3 and Dragonfly). Finally, at 100%, the AKG Q701 headphones can sound uncomfortably loud with a small DAC (I use these headphones as a bit of a benchmark for efficiency). Output impedance is claimed at 0.47-ohms so it should be a good match for just about any headphone. The difference between the 2 digital filters isn't huge (or even necessarily noticeable as expected). It'll be interesting to see what the slow roll-off looks like and how steep the minimum phase setting is. Subjectively the channel balance sounds excellent; something I hopefully verify objectively. I listened to a few of the same tracks I used recently with the PonoPlayer. Frequency response neutral, excellent detail extraction, low noise floor, plenty of well controlled bass. It certainly sounds more like the AudioEngine D3 than the AudioQuest Dragonfly or PonoPlayer at 44kHz; more of a precise dynamic "bite" to it than a mellower presentation. A number of years ago when I got the Sennheiser HD 800, I got the Stockfisch demo CD as well (Sennheiser HD 800 - Klang Von Meisterhand); though not the kind of music I routinely listen to, it's great ear-candy for times like this trying out a new DAC. The other day I was also listening to the Inherent Vice soundtrack and Kyu Sakamoto's Ue Wo Muite Arukou (aka Sukiyaki) on that disk sounded fantastic for an old 70's track (sounds like it was remastered with greater stereo separation than I had heard previously).

No compatibility issues with foobar and JRiver on PCM. Getting DSD to play after changing "Bitstreaming" to DSD in "Player --> Playback Options..." with JRiver wasn't as smooth as with my TEAC so there still seems to be some rough edges with the driver/firmware (often for some reason I had to unplug and reattach before ASIO DSD playback worked). Realtime upsampling of PCM --> DSD128 worked well and sounded great (as expected). Don't know if others are running into problems with DSD playback.

Okay... Back to holiday mode :-). Will listen more and put up some results for the "GO V2" in the next few weeks!

Enjoy the music everyone...

UPDATE:
Measurements of the Geek Out V2 published.