First, remember that we have to set things up so there's no extra processing being done to the audio. This means installing the drivers (which for this hardware is the "SBX Pro Studio" suite). I installed the newest version on Gigabyte's site; version "RC2" from Jan 2016.

I have of course also checked to make sure the other settings like "Scout Mode" (probably some kind of compression DSP in gaming to detect nearby movement) is off, mixer not doing anything unusual, EQ off, and no "Advanced Features" activated. I also don't see any special BIOS settings or hardware switches that would be significant (I left the Audio Gain switch at the default 2.5x, there is the option of 6x for less efficient headphones on the motherboard).

So, we start with our usual panel of "microscopic" measurements: 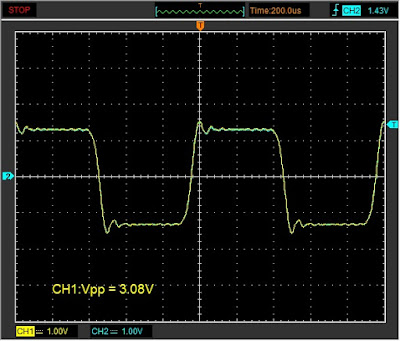 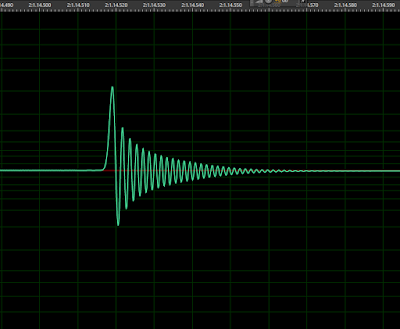 Yikes! That's not nice... As we can see from the "wideband white noise" FFT, it does implement a steep anti-imaging filter with a good -40dB attenuation around Nyquist. The "digital silence" looks fine without excess noise. But the "19 & 20kHz sine" signal which consists of the twin pair of high frequency signals at -6dB is already causing some digital filter overload. I double checked that it wasn't the ADC clipping.

Okay... Let's see what RightMark makes of this.

Numerically, the Gigabyte motherboard doesn't look terrible. The frequency response hints at non-flat result, and the distortion measurements are higher than the other devices compared.

Keep in mind that by default, RightMark will analyze the frequency response starting at 40Hz at the low end... As usual, we have to look at the graphs to really understand what's happening:
Gads! Holy bass roll-off Batman (comparatively speaking of course)! We're looking at -4dB at 30Hz and -6.75dB at 20Hz for the Gigabyte motherboard with the Creative Recon3Di analogue output.

60Hz noise peak for the motherboard is down at -105dB... Still low but it's the worst of the bunch.

IMD+N again shows the Gigabyte motherboard to be the worst of the bunch.

Obviously, it's clear that this is not "high fidelity" we're dealing with on a relative basis even compared to a standard laptop output and the iPad, even at 16/44. It's also a demonstration of the importance of looking at the graphs rather than just the summary numbers to get a better sense of the nuances found between devices.

Numerically, it's quite amazing to see that a cell phone like the Samsung Galaxy Note 5 performs so well! Of course, it's all relative; a cell phone isn't going to replace a USB DAC like the AudioQuest Dragonfly or AudioEngine D3, or Geek Out V2. And the Logitech Transporter is in another class as a hi-fi component. As for the Gigabyte motherboard... As before, it's not so great... 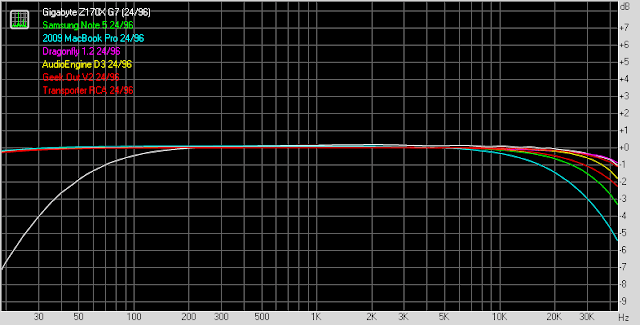 The high frequency extension isn't bad but again like with the 16/44 result, the bass response is compromised. Same -4dB loss at 30Hz, and -6.75dB at 20Hz. Clearly this is not the kind of thing any bass-head likes to see :-).

Okay, let's finish this off with the noise level graph with a 24-bit signal: 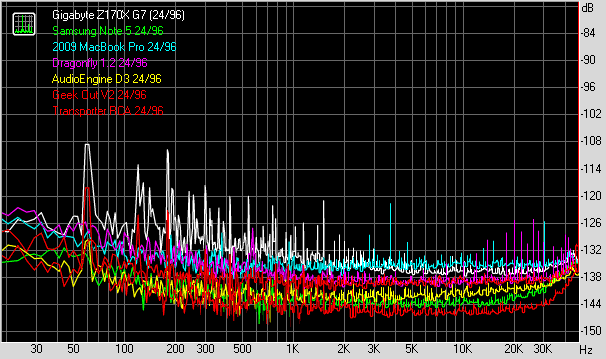 Notice the strong 60Hz AC line hum among quite a number of other noise spikes compared to everything else... And likewise the performance on the IMD+N sweep: 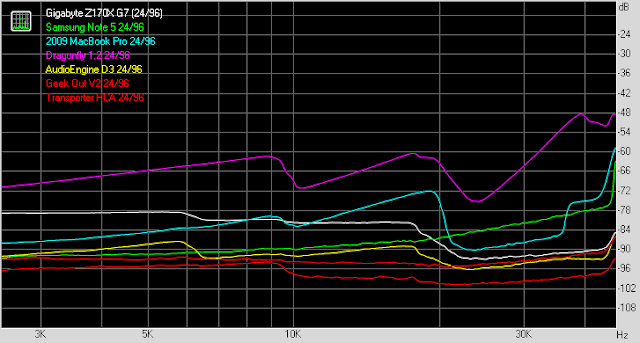 As you can see, through much of the audible spectrum the Gigabyte motherboard performs worse than most of the other devices on the IMD test. It's bested by the 2009 MacBook Pro laptop I measured back in 2013 in the lower frequencies. Again the Note 5 cell phone did pretty well! Good audio devices like the Geek Out, Transporter (the best performing as expected), and AudioEngine D3 DAC perform well. Notice the rather surprising outlier - the AudioQuest Dragonfly v1.2 which I had reported on back in 2014 with some disappointment.

I double-checked and confirmed that the motherboard chipset (Creative Recon 3Di) was incapable of 24/192: 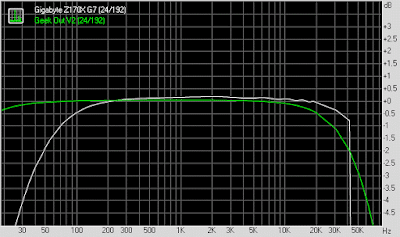 Well, what can I say... The audio quality from this motherboard leaves a bit to be desired. Forget ads that talk about high quality Nichicon capacitors, op-amp switches and whatnot unless the ad actually specifically gives some clarity on the DAC quality. For example, the more expensive member of Gigabyte's Z170X line, the Gigabyte GA-Z170X-UD5 TH (quite a mouthful!) sports the Realtek ALC1150 chipset which is supposed to offer "115dB SNR" but gives up on the more powerful 3D positional processing of the Sound Core3D (mine is a "Gaming" motherboard after all). And for those who want it all - there's the Gigabyte GA-Z170X-Gaming G1 which has both the Sound Core3D for discrete surround processing plus actual Burr-Brown/TI PCM1794 DAC for an advertised "127dB DAC". Of course that's a pretty seriously priced motherboard at around $500MSRP!

After going through the measurements, you're probably wondering how the Gaming 7 sounds like... I hooked it up to my Emotiva XSP-1 preamp and played a few tunes off the computer. No surprise folks, it sounds like it's missing the lowest bass frequencies for music that reach down to those depths. Clearly the subwoofer wasn't being used as much as it should. Otherwise the quality itself in terms of nuance and detail sounds OK. Modern pop like say Lorde's "Royals" (Pure Heroine) is clearly "weaker" when it comes to those room-shaking notes emanating out of my Paradigm SUB 1. I can still feel it, just not as intense. Likewise, electronica like many of the tracks off This Is Dubstep: Anthems just aren't as "delicious" or "satisfying" compared to a truly high-fidelity DAC when you hit those "bass drops". Pity.

There is a way to improve the bass response though, turn on the EQ like the "Crystalizer" setting which adds a "smiley face curve" to the sound: 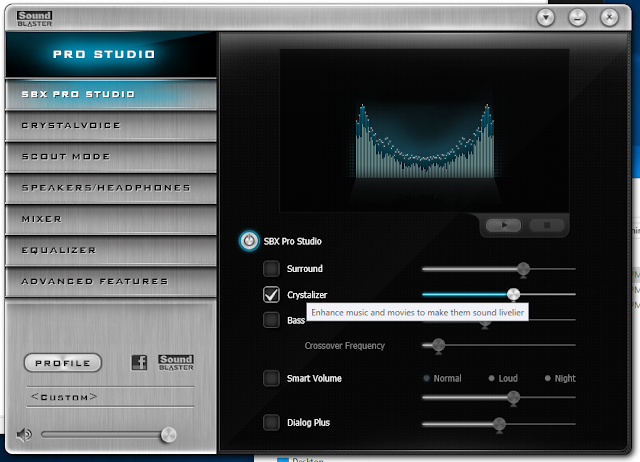 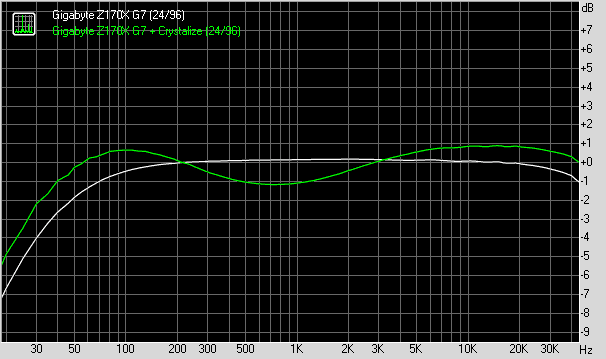 Okay, a bit more bass and treble with the midrange "scooped" down at -1dB. Not ideal, but certainly an improvement in the bass range. You could also play with the "Bass" settings in the EQ and adjust to taste of course.

Conclusion:
Well, if you have a motherboard using the Creative Sound Core3D chipset, that's the sound quality to expect. I suspect the quality is no different from the actual Creative Sound Blaster Recon3D PCIe board. I see the specs indicate this board is rated at 106dB SNR which is close to the measured result of ~103dB using a 24-bit test signal.

In thinking about this audio chipset and considering that I have never seen this amount of bass roll-off before in any other device, I think it's actually quite possible that this is intentional. For gaming, especially first-person shooters when you're virtually running around looking for fragging opportunities, or taking precautions to avoid the adversary, positional audio could provide an "edge" in the competition. Maybe a bass roll-off improves the accuracy of 3D positional discrimination by reducing non-directional low frequencies? The software also has a "Scout Mode" which appears to be some kind of enhancement DSP to aid in the sensing when people are sneaking up behind. Maybe someone with some research interest in this or pro gamer can comment on whether this is true. Does low bass attenuation help during intense first-person shooting?

Having described the above, let's be honest... How many audiophiles listen to the analogue output from the computer motherboard anyways?! A serious audiophile would be using an outboard DAC fed a digital signal from computer audio. It's all good when you do that as demonstrated previously. I guess the bottom line is that if you really want a high quality audio output experience from a computer motherboard, just make sure to buy one like the Gaming G1 motherboard with specified reputable DAC, otherwise performance like what's described here is likely what you're going to get fidelity-wise.

Hmmm... Doesn't seem like much is happening this week in the audiophile world. Maybe everyone is preparing to enter the summer holidays?