HOW-TO: Roon 2.0 with ARC released, running Android ARC on Windows. Roon's "grace period". And how about more audiophile remasters of music from the '80s onward?

The big news this week among the audiophile channels I think is that Roon 2.0 has been released which allows remote access to your Roon Core when on-the-go. Nice, it's about time considering that I've been streaming off Logitech Media Server for ages to my phone and at the office! The app that allows access remotely is something called Roon ARC - available for 64-bit Android in Google Store and for Apple devices.
This is a nice step forward and now I can listen to my music on the smartphone. However, I want to also play the music at my office on the Windows 10 computer. However, when remote desktop streaming was discussed with the company, the official answer has been "Roon ARC is mobile device-only application". Well, that's not a completely acceptable answer, I'm afraid. :-(
For the time being, you could run the Android app in Windows with BlueStacks 5 - 64-bit Android 9 Pie edition. Here's a look...
1. Turn on ARC Port Forwarding on your router. This might be optional on some systems when UPNP works. On my system, doing this was necessary to allow ARC access outside of the home LAN (see Roon FAQ). Different routers will have different set-up screens, here's my ASUS ROG Rapture GT-AX11000:
After doing this, in Roon, you should see your Roon ARC tab confirming that it's ready:
If you have a smartphone, you can confirm that Roon will play to the phone app when you turn off your WiFi to the home.
Okay, time to get the Android app running on Windows.
2. Download and install BlueStacks 5 64-bit Pie on Windows. It should look something like this: 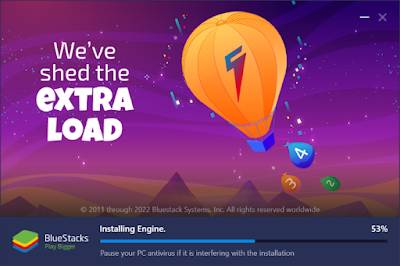 BTW: For decent performance, make sure to enable virtualization in your computer BIOS - either "Intel Virtualization Technology" or "AMD SVM Mode". Many computers should have this turned on already. BlueStacks will issue a warning if it detects this being off and you'll be stuck with only 1-core performance. If you have a highly multi-core/threaded machine (I'm running this on an octa-core AMD Ryzen, with 16 threads), feel free to go into preferences and increase the core count >4. Here are my settings:
Notice I'm activating 7 cores and reduced framerate to 30fps - might as well spread out the emulation threads which might improve responsiveness and since we're not playing a game, 30fps is fast enough.
3. Now install Roon ARC off the Play Store within BlueStacks as you would do on an Android phone (you'll need to log into the store with a Google account, etc...): 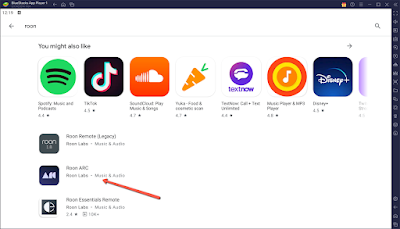 4. Once installed, now run the app.
Notice just like on an actual smart phone, you can control the bitrate of the audio stream which is useful if your internet speed isn't particularly high:
At the office, I have a wired connection but I'm not running any fancy audiophile hardware, plus I won't be turning the volume up to any kind of reference level. Whether the emulator thinks it's on WiFi or cellular, it sounds good enough on the lossy "Balanced" setting. The Roon FAQ indicated that "Original Format" is lossless, "CD Quality" looks downsampled to 16/44.1 or 16/48, "Balanced" is lossy 256kbps Opus, and "Bandwidth Optimized" goes down to 96-128kbps. [Given the results of the "high bitrate MP3 vs. FLAC blind test" years ago, I'd be quite happy with "Balanced" when listening away from the sound room.]
While in theory, maintaining lossy settings like "Balanced" for both WiFi and cellular should result in better stability even with slower Internet speeds, I have noticed paradoxically both on my phone and BlueStacks emulation that sometimes it chokes on the encoding and complains of poor connection (even at home on WiFi). Leaving it in "Auto" mode might actually be more stable. Perhaps Roon can look into this further as I suspect there might be some issues here.
Something you might notice missing in Roon ARC are the DSP functions. I don't see why applying EQ and convolution cannot be done on the server prior to being streamed even if we appreciate that there may be lossy bitrate encoding done.
For completeness, I also tested the download feature into the emulated Android Roon ARC:
I see that it downloaded the original quality from the home server, so the local copy of The Best of New Order is in fact the MP3 VBR version I had on my Server while the downloaded King Crimson Red is the 16/44.1 CD rip. According to Roon, if ARC is offline, it can play the downloaded albums for up to 14 days.
Finally, in the act of playing around with the emulator and settings, it's not uncommon to run into situations where Roon ARC fails to start or might crash into the home launcher screen and refuses to restart. You can wipe out the installed data and start fresh by clearing the program data within the Android settings / Apps menu ("Clear Storage"): 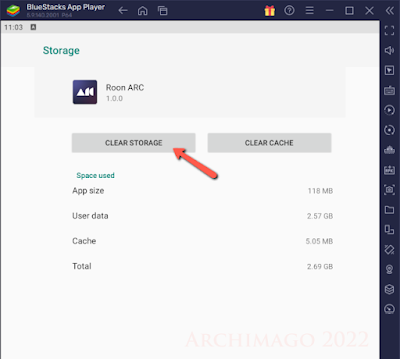 You'll need to log into your Roon account and resync the library again. I've also seen occasions when ARC starts up fine but refuses to play and instead crashes into the home screen. In these situations, "Clear Cache" has often worked without a library resync.
In principle, one should also be able to download Roon ARC off the Amazon Appstore into Windows 11 "Subsystem for Android". I cannot access this yet here in Canada so was unable to compare this with the Windows 10 BlueStacks install. I hear that this feature will open up to many countries soon.
Typically I leave my computer on all the time at work, so I've left the emulator running in the background and it has been ok for the last couple days. Running ARC on an emulator is a "hack" for a newly released application so don't expect too much stability at this point! ;-) Emulation is never the most efficient way to get something done, so I would love to see Windows and MacOS ARC native apps; I would imagine laptops should be considered "mobile devices" just as much as our phones are these days! Maybe they can also incorporate DSP functionality when running on these more powerful machines so we can get things like EQ and convolution (already volume normalization is done on the app)?
Good job Roon, ARC is a nice step forward - finally!
ARC still needs to mature with bug fixes. I'm seeing some "Poor connection" issues and confusing warnings that "Something went wrong" especially with transitions from WiFi to the cell network or going from 44.1kHz to 48kHz content playback. For now, reliability isn't as good as old LMS yet.
Let's see. Going forward feature-wise then, how about also:
- Getting Apple Music, Spotify and Amazon Music services into Roon?
- Bitstreaming TrueHD and EAC3 with Atmos content over HDMI? (eg. Apple Spatial Audio)
Hopefully all in good time!
--------------------
There have been discussions about the fact that Roon 2.0 basically requires persistent Internet connectivity to function, even for searching and playing local content. I wonder why the change from a 30-day "grace period" for offline functioning. I don't understand the issue, is this about piracy of some sort? Currently, it's unclear exactly how long Roon 2.0 can function without "phoning home". Over the years I've seen loss of network service for a day or two at home for example when stormy weather takes out local Internet cable nodes so something like a week with basic search/playback functioning I imagine would not be unreasonable? I think the fact that we're talking simply about playing one's own music library and this is not about streaming licensed albums from a subscription site is an important factor when balancing the consumer's expectations and rights with whatever the company worries about when reducing that 30-day window. Some transparency into the rationale would be nice.
If this is of concern to you (or if you run an older OS below Windows 10, or MacOS Catalina), and you don't need ARC, you might consider staying with Roon 1.8 "Legacy". Supposedly this install will not keep bugging you with updates.
While I have not seen it yet, inevitably, I'm sure we'll come across forum posts about "Does Roon 2.0 sound different from 1.8?" or "Roon sounds worse than Audirvana/JPLAY/etc..." Well, so far in some preliminary testing, Roon 2.0 has been bit-perfect with DSP and volume normalization turned off. And yeah, as discussed before, with player software, bits are indeed bits when it comes to the output from decent DACs (also discussed here, and related to this). Anyhow, I hope that in the 2020's, we can pretty quickly as audiophiles recognize not to waste too much time on bit-perfect software sound quality speculations unless there's evidence to show otherwise beyond just some subjective "I hear a difference!" claim by self-professed Golden Ears on the Internet. 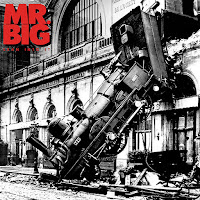 A quick note, if you like '90s rock and am interested in an SACD with multichannel mix, Mr. Big's Lean Into It (30th Anniversary) (1991, 2021 release, DR11 Stereo, DR13 Multichannel) turned out quite well. They've preserved the dynamic range and it does look like it was sourced from original analogue tapes (not just an upsample) for the stereo version.
The multichannel 5.1 layer was done tastefully with selective use of the LFE channel. It's one of those mixes where the engineer isolated the lead vocals in the center channel which I quite like. Make sure you have a good center speaker for native playback, otherwise it might sound better as 4.1 with phantom center reproduction.
Amazing to think stuff like this from the 1990's are now 30 years old! So, maybe instead of the usual remasters like yet another Miles Davis, or Coltrane, or Brubeck, or Mingus classic jazz of the '50s and '60s, or rock/pop like Pink Floyd, The Beatles, Dylan, The Who from the '60s and '70s, we're gradually creeping into music and genres of the '80s and '90s that might deserve another listen using audiophile production standards.
I just hope as the "Loudness War" became more intense through the '90s that there are still good quality "unmastered" (ie. non-dynamically crushed!) original tapes or raw digital captures to recreate the albums but with more life. If they can do that, the remastering efforts would be much more rewarding that what has been done with those old 1950-60's era jazz albums that never really sounded bad from the beginning! For example, basically everything by the Red Hot Chili Peppers starting from One Hot Minute (1995) could be redone with dynamics 'restored' if possible. I suspect a good digital version of Stadium Arcadium (2006) would be amazing, likely superior to the vinyl (which was a more dynamic mix/master). I'd certainly be in line to grab such a remastered "audiophile" SACD, especially if there's a multichannel mix to sweeten the product! One can only dream...
As usual, hope you're enjoying the music, dear audiophiles!
Posted by Archimago at 08:31:00
Email ThisBlogThis!Share to TwitterShare to FacebookShare to Pinterest
Labels: How-To, Multichannel audio, Roon