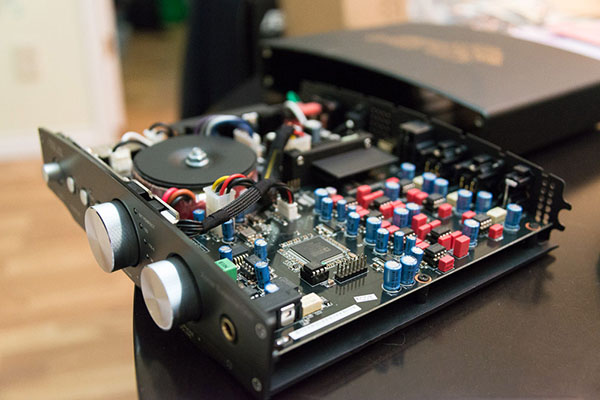 As I indicated in the E-MU 0404USB page, this is my new workstation DAC. The measurement setup is somewhat different but I will use the 040USB done on the workstation itself rather than the laptop I used in the previous page:
- Computer: Intel i7-3770K @ 4GHz, 24GB DDR3, ASrock Extreme 4 motherboard
- E-MU 0404USB --> USB2 of the computer motherboard using generic USB cables. E-MU located about 3 feet from the main computer (too close results in obvious RF interference raising noise floor).
- For unbalanced testing: RCA (3ft, Radio Shack shielded cables ~$10) --> XLR adaptors (maybe $25 for the set)
- For balanced testing: "Monoprice" brand XLR's bought at pro music shop years back
- The electrical outlet to the gear is provided by a Belkin 10-head surge protected power strip connected to my CyberPower 1500PFCLCD UPS which protects my computer. No fancy powerline filter needed to get these results :-)

A few observations: Well made DAC. Asynchronous USB interface with the CM6631 receiver. Likely much more expensive if it came from some boutique audio brand. Heavier and larger than I expected! Should be a good test of the approx limits of the E-MU as testing gear. The upsampling certainly does something to the sound and so far, I'm not a fan of what it does...  Let's have a good look at it later on. 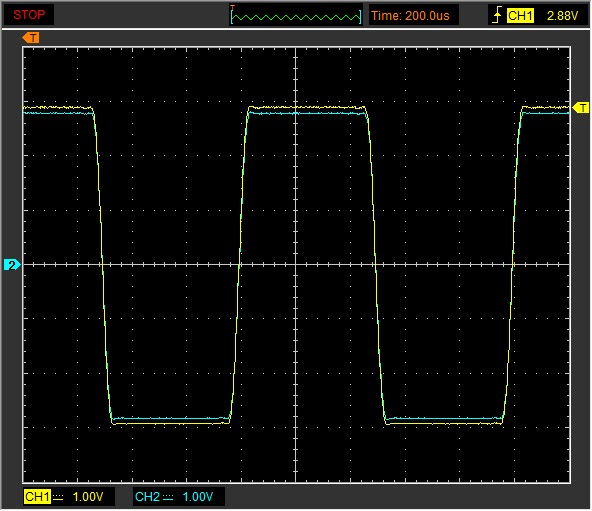 Here's what a 1kHz square wave at 24/44, 0dBFS off the RCA jacks looks like under the oscilloscope (oversampling off). Overall the waveform looks good. However there's some channel imbalance with the right (yellow) channel slightly stronger by about 80mV. 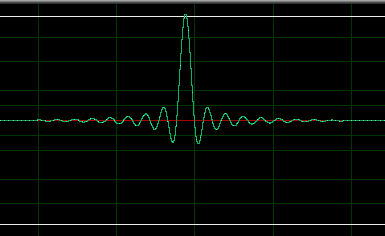 The first 2 columns are the result between using the RCA vs. XLR cables. Clearly XLR is the way to go with 5dB improvement in noise floor, dynamic range, and stereo crosstalk. Bottom line, XLR buys you about 1-bit in digital resolution according to my setup with the Essence 1.

The last 2 columns are with the computer running full load (hence the note "NOISY i7"). I was running the machine full tilt with Prime95 and the graphics card inside (nVidia GTX 570) doing the "Furry Cube" demo/bechmark from GPU Caps Viewer. Notice how the RCA unbalanced setup resulted in significantly increased noise floor by 14dB (about loss of 2 bits resolution)! XLR setup however ran stably with no evidence of the noise pollution. 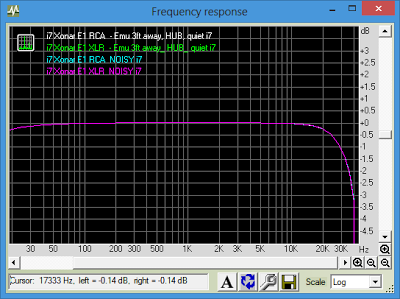 No major issue since we're looking at -1dB attenuation at 30kHz. However, compared to other DAC's I've tested, the drop off does seem steeper than I had expected. (I'll speak more about frequency response issues later). 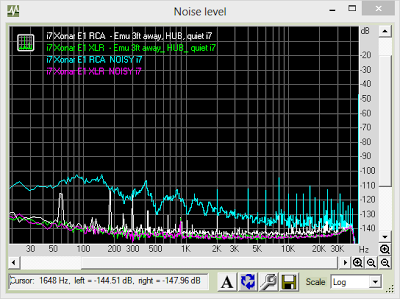 Clearly the "RCA NOISY" spectrum (cyan) is much inferior to the others. However, the RCA "quiet i7" (white) has a number of spikes evident including a -115dB hump at the 60Hz powerline frequency (IMO this is inaudible at normal volumes). 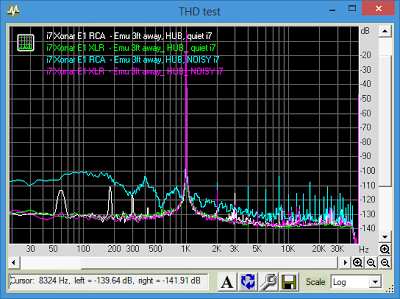 Again, as above, the RCA output shows electrical noise pollution. Remember though this is essentially a worse case scenario with the CPU & GPU running 100% full tilt which should never be the case if you're trying to listen to hi-fi music!

Jitter (J-Test) Analysis (24/48, RCA output):
Using the 24/48 signal and my usual analysis with WaveSpectra, this is what it looks like with upsampling disabled:

That's pretty good. The occasional spike down at about -120dB below the peak, sideband well controlled. I doubt this level of jitter would ever be audible with human ears as a test signal and IMO impossible with actual music.

Some audiophiles have this belief that computer load somehow affects jitter so they will run massively stripped down OS'es because supposedly it improves jitter by reducing unnecessary processes... Here's what it looks like with Prime95 running the CPU 100% and at the same time I'm straining my nVidia GTX570 with FurMark:

There's now a "bump" down at 8-9kHz range, about 110dB below the 12kHz peak. Looks like electrical noise; not jitter. If this is all that happens with a large unrealistic load (100% CPU and 100% GPU load ain't something you'd likely ever do while trying to enjoy high quality audio!), I say don't waste time stripping down the OS!

With upsampling turned on:

Pretty much like the standard jitter FFT above, no change whether upsampling on or not. At least for the Essence One, no evidence that upsampling helps reduce jitter.


Upsampling 'Feature':
As I mentioned at the beginning, the upsampling "feature" currently doesn't sound right to me. It just seems to dull the sound and take out the usual sparkle in music. Here is why at 44kHz: 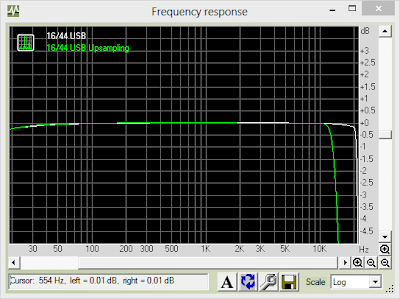 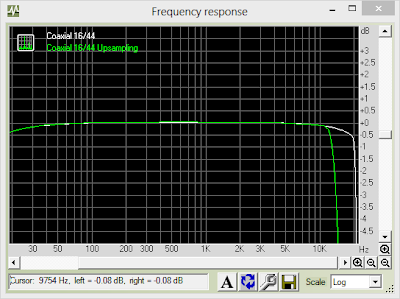 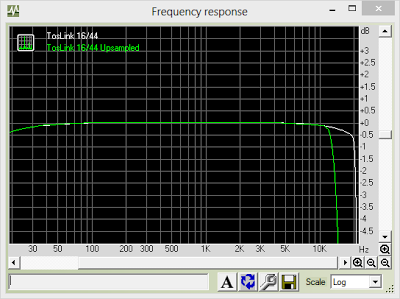 No matter which input selected - USB, coaxial, TosLink - activating the upsampling feature (front button) results in quite a nasty lowpass BELOW 15kHz!  This is clearly audible to most young people and probably to a number of older audiophiles :-). ASUS, what's going on here?!

The situation is better at 24/96, but you still see a premature high frequency drop off: 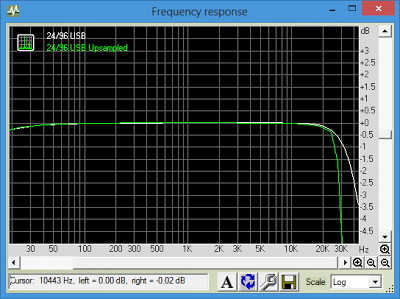 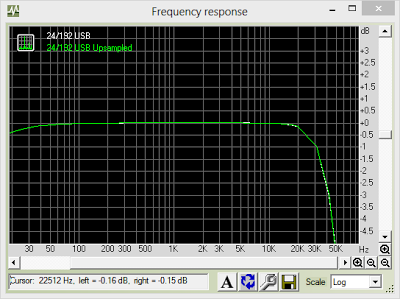 No difference between standard and upsampling turned on! But they BOTH drop off together down to -5dB by 50kHz.

So far, I have not seen ASUS respond to this and I can only assume that at least in the case of 44kHz, there is some kind of BUG in the firmware causing this issue since that 15kHz drop off is quite noticeable. Although not perceptible, the high frequency roll off at 96 and 192 kHz sampling rates also seems a bit premature compared to other DAC's I've tested.

Here's the impulse response with the upsampling turned on: 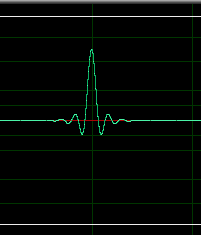 Basically what they did with introducing an earlier roll-off is to reduce the pre- and post-ringing on the impulse response...  I assume the above is intentional. Seriously, not a reasonable price to pay for the loss of the high frequencies!

Conclusion:
Subjectively, I like how the Essence One (upsampling OFF) sounds - nice and clean, detailed, good rendering of dynamics... It certainly has the oomph to drive my AKG Q701 headphones (compared to the E-MU 0404USB) and the Sennheiser HD800 has never been this detailed. The dual volume controls (main speaker out + headphone) was a major reason I bought this for my computer workstation listening. Drivers are also much less buggy than the E-MU and the ASIO works well without any issues switching back and forth between sampling rates.

If you can, I highly encourage use of the balanced XLR output. With my testing setup, the XLR proved to be resilient to electrical noise and lowered the noise floor by around 5dB (not likely audible but nice to know!).

BUT, I cannot recommend this DAC wholeheartedly until they fix that really strange frequency response issue with 44kHz sampling rate and upsampling. Strange that ASUS would hype up the "symmetrical upsampling" as a feature but in reality IMO noticeably worsening the fidelity when you turn it on!  I also don't know why there's a premature roll off at 96kHz and 192kHz even when the upsampling algorithm isn't activated...  It'll be nice to hear an official response from ASUS about this - is this intentional!?

Other than some astute comments I've seen on message boards, it's interesting that most 'official' reviewers have not mentioned this rather obvious anomaly.


ASUS:
If you guys are looking into this frequency response issue with upsampling, why not just implement a minimum phase filter with slow roll off from about 18kHz for the 44/48kHz sampling rates? This is of course a bit of what the big boys like Esoteric, Ayre and Meridian have been doing over the years.

That would be something many of us can conceivably use and potentially beneficial from the sound quality perspective (lets turn this defect into something potentially good!). It should be quite easy to implement with the SHARC DSP - open source software like SOX can easily do this already for years...

In fact, all my 16/44 music is minimal phase upsampled to 24/88 on the server side when I listen to the Transporter to get rid of that pre-ringing...