Since late 2012, I upgraded my computer workstation's DAC to the ASUS XONAR Essence One and this left my E-MU 0404USB free to be used as a dedicated ADC and measurement device.

For ease of use, I decided to "standardize" on the RightMark Audio Analyzer suite of measurements for these USB0404 measurements. At this time, the newest version is 6.2.5, available free from the website. In time, I might upgrade to the PRO version. What I can say so far is that RMAA is remarkably consistent with good inter-test reliability so long as one has the technique figured out with one's equipment. It's very easy to get things wrong during calibration for example. As usual, there are the caveats to keep in mind and the results I get here may not be comparable with others (good writeup here: http://nwavguy.blogspot.ca/2011/02/r...yzer-rmaa.html).

One nice feature about external DAC/ADC's like this one is the fact that it has LED's to indicate if signal is clipping. I've found this invaluable in measurements since it allows me to make sure I'm maximizing the measurable dynamic range. 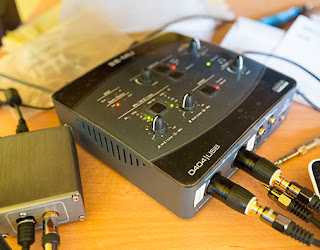 To get a sense of what the E-MU 0404USB is capable of, here are a few numbers in RCA loopback mode - it looks like the 0404USB is not bad as a DAC itself! Internal DAC chip AKM AK4396 (same as Transporter).

Summary compared with Logitech Transporter (more detailed measurements of this device in a future blog post):

Notice that the Transporter measures better here but it is using XLR cables. If I had some balanced TSR to XLR's for the E-MU, I suspect the it would be even better.

Nice and flat frequency response at 24/96: 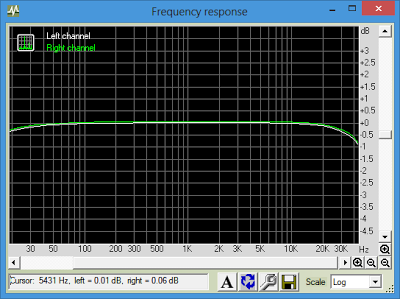 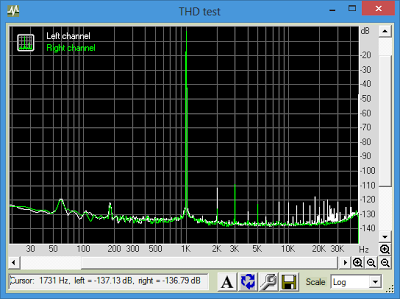 The jitter is really good for the E-MU also (it uses an asynchronous USB2 interface). This was done with the Dunn J-Test at 24/48 playing and analyzed with WaveSpectra 1.40E running a 131,072 point Blackman-Harris FFT. Note that I have seen various comments made in the forums that the 0404USB has bad jitter issues - well, I don't see it, in fact if I were to estimate, we're looking at <250ps using both the DAC and ADC in this case:

With digital silence playing, here's what the noise floor looks like:

A few spikes noted, the tallest about -135dB down.

For such an inexpensive unit, I'm impressed! In the days ahead, I'll update this blog with the other DAC's and devices tested... I certainly do not claim that the 0404USB is near as good as dedicated measurement gear like the AP devices used by Stereophile. However, for the at home hobbyist, I suspect these kinds of tests will do nicely to help differentiate what's reasonably good from the bad.

From a subjective perspective, I've enjoyed using the 0404USB as my main DAC for about 3 years. The sound is precise and clean. Some would call it "analytical" but I honestly have no idea what that's supposed to mean since that sounds like a good thing to me :-). Basically, an honest portrayal of the digital audio with a good flat frequency response.

I do have a few gripes:
1. It's discontinued and the drivers were never great.  As noted above, I'm using the latest "beta" driver which is at least a couple years old. At least it's still compatible with Windows 8! On occasion, if I used the ASIO driver, it would mess up Windows mixer and I'd need to reset the sampling playback rate.

2. The headphone out is weak. It's fine with efficient headphones but my AKG Q701's were too much for the headphone amp.

3. Volume pot's got a bit noisy over the years.