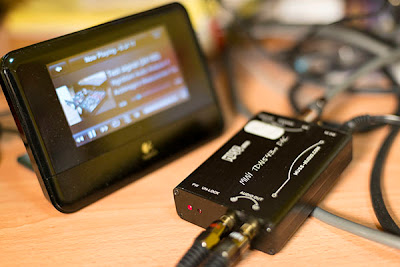 For fun, I thought I'd run an old NOS DAC I had lying around to see how it measures...

This is the ancient Philips TDA1543 DAC (data sheet says 1991), 4 chips in parallel - supposed to improve noise measurements. This particular model is the MUSE Audio one you can find on eBay for about $60 with case & wallwart... For this test, I actually ran it with a better AC adapter (Samsung 12V, 2A unit). 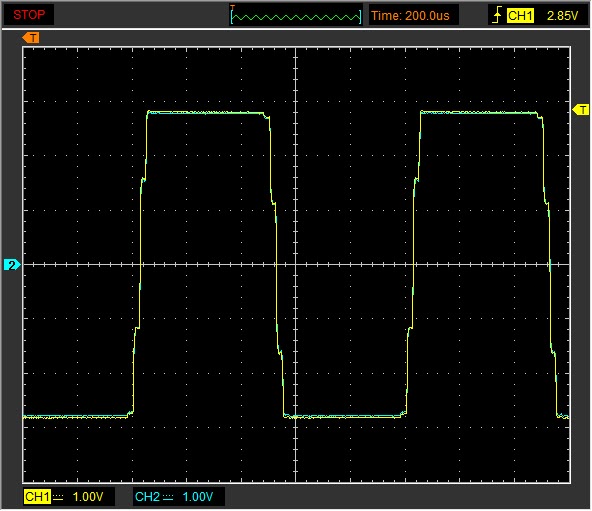 I suspect the ADC is adding a bit of the pre-ringing... Otherwise, this is as expected from a NOS DAC - no ringing due to lack of digital filtering. Absolute polarity maintained.
---------- 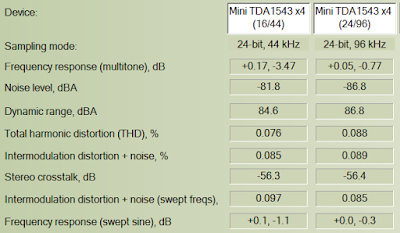 Frequency response drops off at the upper end on NOS DAC's at 44kHz sampling rate and you can see that quite clearly above - this improves significantly with 96kHz. Looks like the performance overall improves with 96kHz sample rate except for the stereo crosstalk which remains quite poor (even worse than the SONY CFD-S05 boombox). Many folks who use NOS will upsample the data before feeding into the DAC to take advantage of this fact.

Jitter (16/44 Dunn J-Test) - Due to the stair-stepped aliased nature of the sine waveform, some of this is distortion but most of it is jitter sidebands.

Conclusion:
Well what can one say about NOS DAC's like this... They measure poorly. Yet, many swear by them. Sure, this is an inexpensive NOS and there are much more expensive ones out there like the AudioNote products (the AudioNote DAC 0.1x looks like it only has a single 1543 and upper models all seem to use the AD1865 - don't you love their term "1x oversampling"?!).

Personally, I find the sound isn't bad. It does have the high frequency roll-off which works OK for fatiguing music but that also takes away some of the "sparkle" in good studio productions. Goes to show just how amazingly tolerant hearing can be!

Looking at all those sidebands in the jitter plot, I'd estimate it to be >5ns; but yet it still sounds quite good! IMO, more evidence to say there's no point to quibble about the odd sidebands and whatever picosecond jitter found in well engineered gear...
Posted by Archimago at 21:02:00
Email ThisBlogThis!Share to TwitterShare to FacebookShare to Pinterest
Labels: DAC, NOS, TDA 1543