Thanks to a good buddy, I got a chance to hook up the test kit to his newly acquired Oppo BDP-105 player last week... 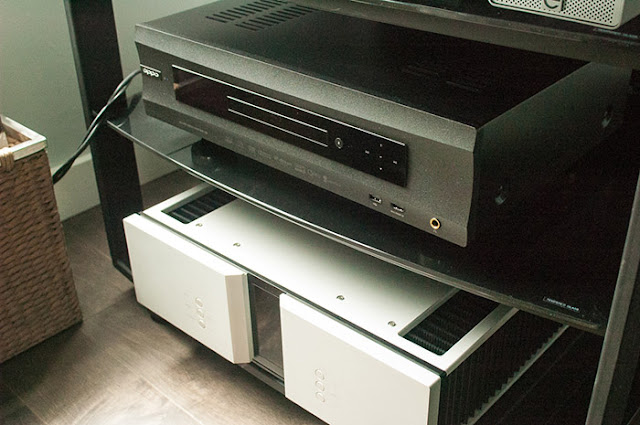 (Yup, that's his Vitus Audio amp under the Oppo.)

As many of you know, this is the new "jack of all trades" Blu-Ray player from Oppo. Apart from the video wonder this device is capable of (including 3D, 4K upconversion...), for audiophiles, the internal DAC is the well-respected "ESS SABRE 32 Reference ES9018" in dual configuration (quad differential stereo) and also has surround playback. The fact that it has a USB2 interface for audio clearly adds to the flexibility something like this could be used as in a HTPC setup. I believe there is also talk of being able to play DSD files from a USB stick with a future firmware update (looks "official" now, not sure if this will be possible with the computer USB2 input).

This is a similar setup as what I used to test my Transporter previously. The laptops are being run on battery (if that makes any difference, could reduce AC adapter noise I suppose).

Oppo currently does not have a Windows 8 driver for the USB2 port; that's why I had to use the ASUS Windows 7 laptop. We did not have any trouble with the driver so it seems reasonably stable. I actually tried to install the Win7 driver on Win8 but it refuses even with "compatibility mode".

I would have liked to measure the XLR output but it was too much of a hassle to move the setup around, so here are the RCA results at the various sampling rates:

As you can see, the results even from the RCA with a 6' cord looks nice. If we had hooked up the XLR, no doubt it would be even better! A few observations:
1. I'm impressed by that 24/192 measurement. To have it not deteriorate compared to the 24/96 result speaks highly of the DAC quality. Most DAC's I've tried at this sampling rate shows deterioration compared to an "optimal" result at 24/96.
2. These are the lowest THD and IMD numbers I've been able to measure thus far. Obviously the BDP-105 is hitting the limits of my ADC.
3. I suspect the Essence One's -103dB stereo crosstalk is a result of the fact that a much shorter 3' RCA cable was used in that instance, rather than inherent superiority (Transporter was measured with similar 6' RCA cable). 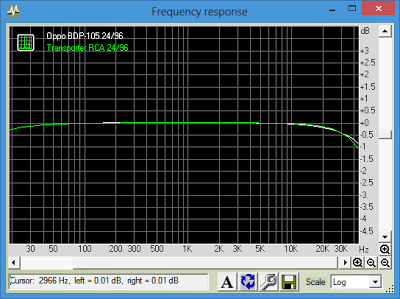 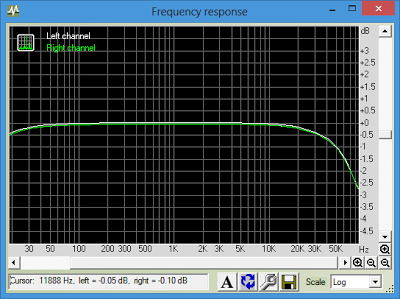 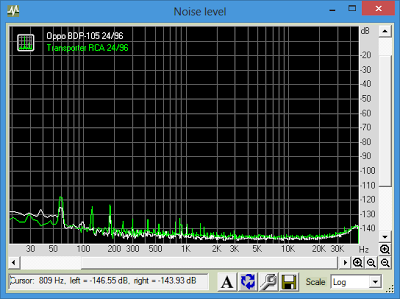 Dunne J-Test 16/44:
Removed. Was able to confirm that LSB dither was being added to the signal so the J-Test was invalid. May retest in the future...

Update: Redid this on April 5th, here it is and it looks very nice and jitter-free: 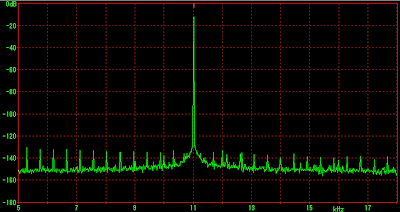 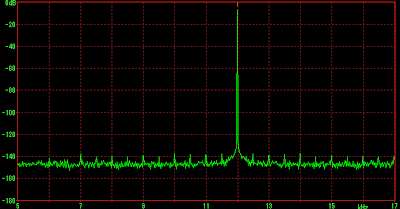 Nice! The peaks are looking like J-Test modulation only...  If there's jitter here, it's totally irrelevant when playing music.

Conclusion:
Well, I got to spend an afternoon gathering the measurements and listening to this unit. What can I say... It sounds wonderful and is completely consistent in this regard with the measurements obtained. Genres sampled included vocal jazz (Melody Gardot), pop (recent Britney Spears / will.i.am :-), classic jazz "Kind Of Blue" SACD, among others -  they sounded dynamic and detailed.

As is, in stock form, even just measuring the unbalanced output, there's really nothing to pick at whatsoever from the measurements. I think it's fair to say this is "state of the art" (lets see if folks like John Atkinson can find fault with the pro AP gear!).

Realize that these measurements were obtained without any fancy cables. In fact, the USB cable used for playback from the Windows 7 laptop to the Oppo BDP-105 was 15 FEET long, thinly shielded, generic eBay purchase probably straight from Asia for <$20... Please explain to me, why do audiophiles need fancy USB cables costing hundreds of dollars again? (BTW, we did not decide to use this 15' cable purposely to test, rather it was already conveniently connected so didn't bother switching it out; if the results were looking bad, this would be the first thing I would have suspected.)

With regards to the BDP-105, the best part of all this is of course...  It's only $1200USD! Fantastic job Oppo and an amazing value even just as a high quality DAC!