Before I start, I just want to say that over the years I have not been involved in any of the discussions around this mod or the merits of it. Even though I do not necessarily agree with many of Soundcheck's comments on his site, I do appreciate his work in putting it together and creating the install script which was easy to run; it's always good to have hobbyists experimenting with stuff and it's interesting to see the feedback from users.

I followed his instructions to turn off the plug-ins, change to server-side decoding of FLAC in the "File Types" tab, "No Volume Adjustment", etc... As per instructions, WinSCP used to transfer the script and PuTTY for logging into the Touch.

I downloaded the script with 'wireless LAN deactivated' but noticed in the status screen that WiFi was labeled as "enabled" still (not sure if this means it's on or off!), so I used the 'tt -w' to turn off (or on) the WiFi status for good measure during a few of the measurements. Here's the screenshot of the "status" output for the "NoWiFi" condition in my charts (in retrospect, I think the modification turned off the WiFi, so when I 'disabled' the modification, it means I must have turned it on... not that it makes any difference as results show): 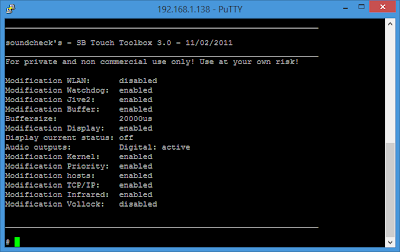 I also wanted to test the analogue output with "tt -o 1" but I could not get analogue output to work even though the status screen said it was enable. If anything, one would expect that turning off the screen, no wifi, server side decoding may drop the analogue noise floor maybe a few dB's... Oh well, I guess anyone who would go through this amount of modding would not be using the internal DAC anyways. 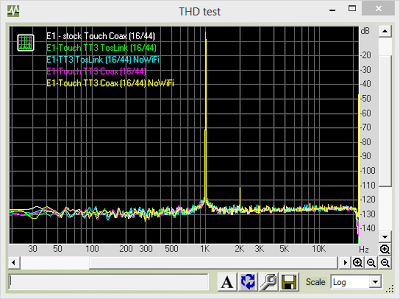 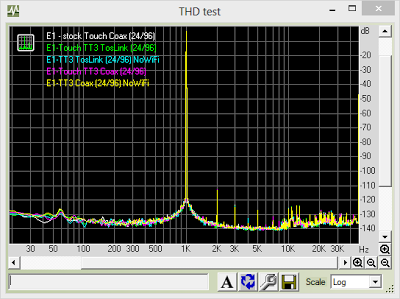 The first column of each table is the stock Touch using the coaxial output (proper shielded coaxial cable of course).

Conclusion:
I see no difference with the Touch as digital transport despite screen off, no WiFi, server side decoding on these objective measurements. Subjectively, likewise, the Touch sounds great played through the Essence 1... Loving the sound of some Depeche Mode as I'm typing here with the mod still installed. I can see how not having the screen on and the ability to "touch the Touch" to make track selections would annoy me after awhile :-).

At least in my case with this specific DAC, the Touch Toolbox 3.0 mod made no difference to measurements even down to below -110dB noise floor.