In order to do the measurements, I brought the gear downstairs to the basement which is an electrically quieter environment. There's a Belkin PureAV PF60 power center there for all the equipment. Also, the measuring computer is now the AMD Phenom X4 laptop with Win 8 usually used by my kids :-). The laptop was running on battery - I could detect a 0.5dB difference with the AC adaptor plugged in down at the -110dB noise level.

One note about the XLR measurements you'll notice - the THD levels are a bit higher than RCA. I believe this is a result of the fact that the E-Mu 0404USB could not handle the XLR voltage from the Transporter and I had to use the analogue attenuators to (just barely!) avoid clipping.

Lets start with the 44kHz signal:

Undoubtedly, the XLR output is significantly better than RCA. One observation is that through the RCA's, the stereo crosstalk remained around -90dB whether the signal was 16 or 24-bits. I'm not sure if this is the limit of the Transporter itself, or has to do with the cables I used - a pair of AudioQuest 6' interconnects. I don't remember which model of AudioQuests these were (bought a few years ago in a moment of weakness :-) but they are longer than the 3' I had been using to measure upstairs.

Again, we see the -90dB stereo crosstalk limit with the RCA output. XLR's measure is fantastic! Likely hitting the performance limits of the E-MU 0404USB and ~3dB better than the Essence One (of course the E1 did not have the benefits of a power filter or low noise environment of the laptop running on battery).

The WiFi router was in the same room as the Transporter hence the 90+% wireless strength. No difference in the measurements whether WiFi or ethernet.

To show in graph form the difference in noise floor between the RCA and XLR: 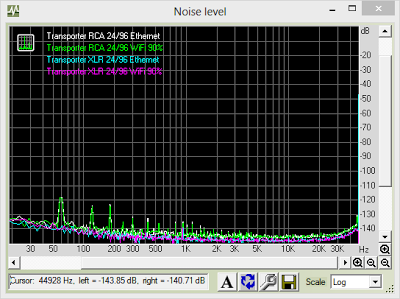 Notice the noise spikes like at 60Hz using the RCA cable (the AQ construction seems to be shielded but can't confirm unless I cut it open!).

Conclusion:
1. Overall the Transporter measures well! Phenomenal XLR performance - best I have been able to measure so far; >19-bit dynamic range.
2. A bit unclear about that stereo crosstalk measurement with RCA however. A bit higher than I'd have expected. Might need to try a different cable and see... (In case anyone wondering, I have not opened up the Transporter to change the unbalanced volume attenuation.) --- SEE ADDENDUM: I believe it's the cable!

ADDENDUM - (Cables do make a difference :-)

Further exploration of the stereo crosstalk issue shows that it likely was the cable afterall! I switched the analogue out from the AudioQuest (can't confirm but the cable looks like the current "Yosemite" model on their web page) to a pair of old 6' Tributaries interconnects (probably 50% the cost). As seen below the Tributaries improved stereo crosstalk by ~2.5dB:

Here's how the graph looks (AQ [white] vs. Tributaries): 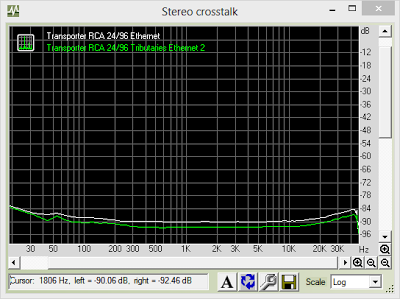 Furthermore we're starting to see that 24-bit audio is starting to show better separation compared to the 16-bit data with the Tributaries suggesting that the cable was the limiting factor! I expect a good 3' cable would improvement the measurement even further. At this point then, I believe the Transporter's RCA stereo crosstalk is just fine.

Interesting that the more expensive AudioQuest measured worse than the Tributaries in this setup. As a result of this, I'm going to demote the AQ's to my CD player - something I would never know to do unless I ran this objective test.

With the DEQ2496 on bypass mode (ie. no room EQ processing):

Using the Tributaries RCA cable as output, no difference whether the DEQ2496 was digitally in line or not. Note that I used rather generic TosLinks - well constructed relatively thick plastic optical cables bought on sale for $10 each. Alas, by this time I had disconnected the XLR's and I didn't care to disrupt the Transporter setup again :-)

Now what happens with the DEQ2496 in line (remember, the digital data is now going through 2 TosLink cables as described above)?

Obviously quite a bit more jitter has been injected by the Behringer! My estimate looking at the top 8 sidebands suggests that the jitter level now is 2ns using some measurements in WaveSpectra!

Since I can just turn the digital loop on and off, I can do instantaneous A-B'ing of the sound. Even in this condition, I cannot say the clearly increased jitter is at all noticeable. What can I say, even knowing this I'm just fine with keeping the DEQ2496 in line and use the room EQ function since *that* is audible! At least now I can say I've done an A-B test examining the effect of 2ns jitter for myself.

Looks like the Transporter's BNC connection is the winner followed by AES/EBU. TosLink worst for jitter not surprisingly.

Addendum: March 6, 2013
Got some AES/EBU digital cables - here are the measurements.

Addendum: June 26, 2013
As part of the transport measurements, I decided to have a closer look at the Transporter. Here's some more data to consider: 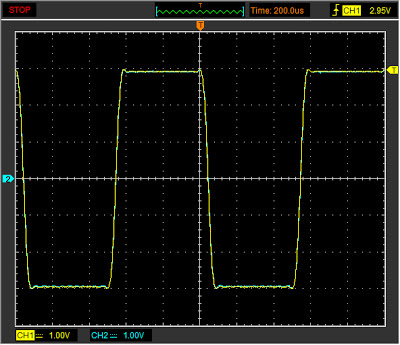 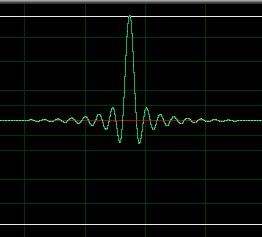 When you set to "slow" roll-off, look what happens: 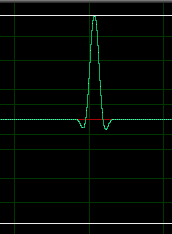 Wow... Barely any pre and post-ringing! However, clearly to achieve this, roll-off is expected to be very significant.

The "big board" RightMark summary - all based on RCA analogue output:

Look at the 16/44 frequency response; clearly roll-off is quite significant. Here's the graph: 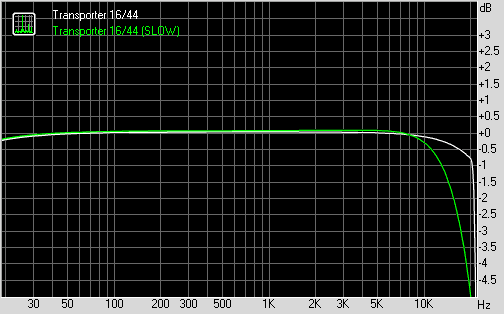 You see the response deviating significantly by about 8kHz and more than -1dB by 15kHz. For good 'youngish' ears, that's significant.

This is what 24-bit buys you in terms of noise floor - remember this is with RCA output, expected to be even better with the XLR: 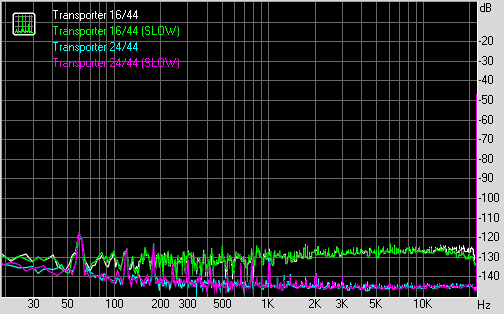 At 24/96, the filters are still quite different, but inaudible difference for anyone but cats, dogs and machines :-): 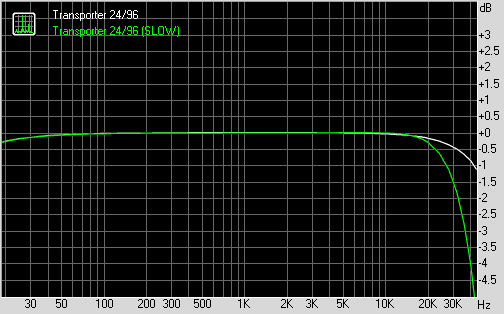 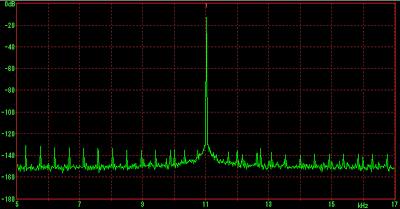 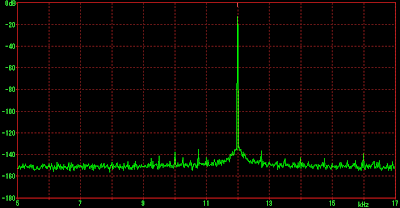 Summary: I remain very impressed with the Transporter. Kudos to Sean Adams and the Slimdevices team back in the day. Technically a beautifully designed machine and it remains my primary digital front end in the listen room. I was a bit surprised by the slope of the slow roll-off - much more than I thought!